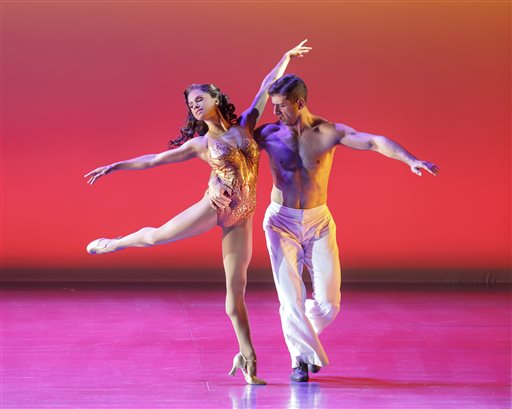 This photo provided by Joan Marcus on Aug. 28, 2015 shows ballerina Misty Copeland in the musical “On the Town” at the Lyric Theatre. Until Sept. 6, 2015 Copeland will play Miss Turnstiles, a love interest for one of three sailors enjoying a few hours of shore leave in 1940s New York. (Joan Marcus via AP)

NEW YORK (AP) — The stage lights have been hard to get used to and she worried about limited rehearsal time, but ballerina Misty Copeland has put aside her nervousness and is finding her feet on Broadway.

“It’s an incredible feeling,” she said this week after making her debut in the dance-heavy musical “On the Town” at the Lyric Theatre. “I felt nervous that I was going to forget stuff, which I don’t typically feel. We rehearse so much as ballet dancers and the steps become ingrained in your muscle memory.”

Copeland is playing Miss Turnstiles, a love interest for one of three sailors enjoying a few hours of shore leave in 1940s New York. The role requires both acting and singing, in addition to plenty of dancing, including a 15-minute ballet at the end. The part was originally done by Megan Fairchild, a principal dancer at the prestigious New York City Ballet.

Copeland, who recently became the first African-American woman to be a principal dancer at American Ballet Theatre, had only six rehearsals and sang her dialogue out loud only twice before going on, but each time she appeared the crowd went wild, cheering her entrances, big numbers and giving her a thunderous standing ovation at the end. The audience was more diverse and young.

“The audience is so different from what I’m used to. You know immediately that they are excited to be here, and it’s an incredible feeling. I just felt so overwhelmed — that first entrance and throughout,” she said.

Copeland admitted to feeling pressure before her debut Tuesday, but said she enjoyed herself more Wednesday, after getting that first performance behind her.

“I remembered all the steps, but I wasn’t happy with Miss Turnstiles. But I was happy with how everything else went. The lights are very different on this stage — they’re a lot stronger,” she said. “But I’m already starting to adjust and get used to it.”

“On the Town,” which was critically acclaimed when it opened in October, has struggled to fill its enormous, 1,874-seat theater. It closes on Sept. 6, which will also be Copeland’s last performance.

“I’m so sad that the show is leaving. I hope at some point it comes back or travels. It’s such an entertaining and spectacular production,” she said.

Copeland said she goes to the stage door after every performance and hopes the crowds will follow her back uptown to the city’s ballet venues.

“It’s such a great crowd and I hope that me stepping into this atmosphere will make them feel that they’re invited to come into my home,” she said.

Mark Kennedy is at http://twitter.com/KennedyTwits.
Copyright 2015 The Associated Press. All rights reserved. This material may not be published, broadcast, rewritten or redistributed.