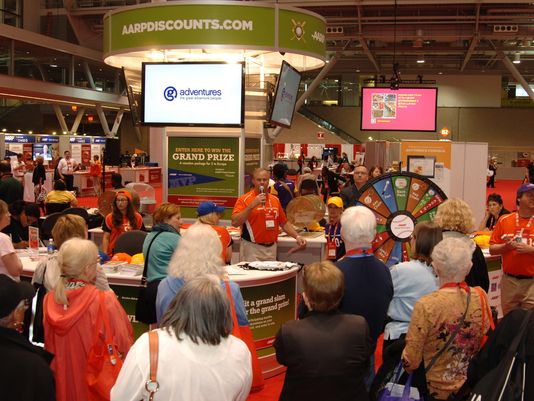 This May 10, 2014 photo provided by AARP Life@50+ shows the discount booth for AARPDiscounts.com at AARP’s semi-annual Life@50+ National Event & Expo in Boston. The last of the Baby Boomers turns 50 this year, and if they want to cry into their beer about getting older, at least they can now buy it at a discount. The first of the so-called senior discounts kick in at age 50, generally along with an AARP card. (AP Photo)

WASHINGTON (NNPA) – Another partisan battle is brewing on Capitol Hill as Social Security in general, and disability insurance in particular, nears a budget squeeze.

“Any of us could suffer an accident or illness we’re not expecting,” said Rebecca Vallas, associate director of Poverty to Prosperity Program at the Center for American Progress Action Fund. The Center hosted a press conference last week to release a reported she co-authored titled, “Social Security Disability Insurance: A Bedrock of Security for American Workers.”

Vallas explained, “We have this amazing program there for us if that happened. Very few people have enough savings to deal with that, and without [disability insurance] most of us would fall into poverty.”

Disability Insurance benefits Americans who cannot earn a living because of physical or mental injuries, illnesses, or disabilities, as well as their dependents, spouses, and caregivers. For many, it is the difference between getting by and abject poverty.

Close to 2 million African Americans are receiving DI benefits. The Social Security Administration reports that as of December 2010, 28 percent of African American recipients were under the poverty line. Without disability insurance, that figure would rise to 57 percent.

But the system is poised to be stretched beyond capacity as millions of Baby Boomers enter high-disability and retirement years. In addition to this population bubble of aging workers, there’s the fact that women have entered the workforce and become eligible for benefits, on par with men. Additionally, the recession has resulted in lower taxes from fewer workers who have to support a sizable population of aging beneficiaries.

With the convergence of these factors, Social Security funds are already plateauing and in danger of declining into inadequacy.

A brief from the National Academy of Social Insurance explains, “At some point in 2016, the DI trust fund’s reserves would be depleted and current taxes coming into the trust fund would not be enough to pay all benefits owed to disabled workers and their families. Funds would be sufficient to pay only about 80 percent of scheduled amounts.”

And the Social Security Administration reached a similar conclusion, reporting that “the Trustees estimate that [both] trust fund reserves will be exhausted by 2033” — and that’s if steps are taken to ease the crunch now. “At that point, payroll taxes and other income will flow into the fund but will be sufficient to pay only about 75 percent of program costs.”

Every year since 2010, the DI fund has paid out more than it collected in taxes and has had to rely on its reserve funds (from past surpluses) to pay beneficiaries on time and in full.

Some elected representatives believe spending on these programs takes too big a chunk of the federal budget. Indeed, Social Security and Medicare accounted for 38 percent of federal spending in 2012, according to Social Security data. From 2012 to 2013, OASDI paid out $826 billion to 53.6 million beneficiaries. Even so,, OASDI has always been less than 5 percent of national GDP.

Disability insurance in particular has become a target for cuts to the program. The “Mack Penny Plan” from Rep. Connie Mack IV (R-Fla.), for example – which proposes cutting one penny of every federal dollar spent for the next six years – would ultimately cut more than $1 trillion from social security through 2022, according to nonpartisan fact-checking group, Politifact.

“Many claim to sympathize with low-income workers, but then discuss beneficiaries as lazy, looking for a hand-out, or looking to game the system. That simply isn’t true.”

Congress is already making cuts amidst the political sparring.

Since 2010, the Social Security Administration has closed 64 field offices and 533 temporary mobile offices, and has downsized around 11,000 employees and counting in the last three years, according to the U.S. Senate Special Committee on Aging. There’s also a huge backlog in disability applications; as of last year, claimants could expect a yearlong wait.

Additionally, there’s a steady flow of misinformation in the political discourse, which confuses Americans on the facts.

Rep. Todd Young (R-Ind.), for example, told a constituent that “nearly 70 percent of all federal spending will go towards Social Security, Medicare, and Medicaid” this year, according to Politifact. In 2011, House Speaker John Boehner told media that the trust funds were “facing imminent bankruptcy.”

Historically, whenever the system faced tough times, there has been a simple fix.

Since the funds are structured in such a way that they can neither borrow money, nor go into default, OASDI woes have been balanced through tax reallocation. With this solution, Congress tweaks the distribution of the program’s 6.2 percent payroll tax contributions between the two trust funds.

Last year, for example. 5.3 percent went toward OASI and 0.9 percent toward DI—this year the split is 4.8 and 1.4 percent, respectively, according to the Center for American Progress.

The American public is usually on board for this solution. In a National Academy of Social Insurance survey of 2,000 Americans, for example, 82 percent of respondents (a majority that held steady across party affiliation) believe Social Security programs should be preserved even if it means increasing current taxes.

Congress has voted for OASDI reallocation 11 times since the program’s inception; it is considered a routine, bipartisan Congressional procedure. But if the current rhetoric and the partisan stalemate that resulted in a 16-day government shutdown last year is any indication, the stopgap may not come so easily.

All of this has taken its toll on the American public. In the aforementioned NASI survey, 57 percent of respondents say they have little faith in the future of the program.

“There’s such a huge contrast between what the American people say and think and what people say in the media,” says T.J. Sutcliffe, director of Income and Housing Policy at The Arc of the United States, a disabled advocacy organization. “The controversy doesn’t seem to be there when you talk to average Americans.”