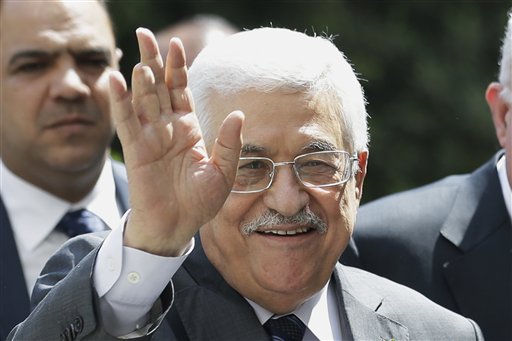 Palestinian President Mahmoud Abbas waves to photographers as he arrives to attend an Arab foreign minister meeting at the Arab League headquarters in Cairo, Egypt, Sunday, Sept. 7, 2014. Abbas threatened to dissolve a new unity government if the Hamas militant group does not yield power in the Gaza Strip. (AP Photo/Hassan Ammar)

CAIRO (AP) — Arab foreign ministers have backed Palestinian President Mahmoud Abbas’s appeal to the United Nations to set a deadline for Israel to end its occupation of lands captured in the 1967 war and make way for an independent Palestinian state.

The Palestinian ambassador to Egypt, Jamal al-Shobaki, said Monday that the Arab resolution issued a day earlier calls for the Arab League chief to push the idea in the U.N. Security Council and other regional and international groups.

Al-Shobaki said the foreign ministers are discussing the draft resolution.

Abbas floated the idea last month at the height of Israel’s 50-day war in Gaza as a way to refocus international attention on Palestinians demands for a state after failed efforts to reach a negotiated peace deal with Israel.

More than 2,100 Palestinians were killed in the war, most of them civilians, according to U.N. and Palestinian estimates. Thousands of buildings were destroyed and tens of thousands of people were left homeless. Seventy-two people were killed on the Israeli side, including six civilians. The war ended with a cease-fire and a promise of more negotiations to end the crisis in Gaza.

Abbas also was seeking a foothold back in Gaza, which was captured from his forces by Hamas seven years ago, and is eager to show the Palestinian public he is working to end the fighting and lead the Palestinians to independence.

Israel strongly opposes Palestinian attempts to pursue independence at the United Nations, saying it is an attempt to circumvent the negotiating process.

Al-Shobaki said the appeal to the U.N. is in line with other international resolutions in regards to the establishment of a Palestinian state and the recognition of 1967 borders as basis for negotiations.

He said that an American veto is a possibility in the Security Council. With Israel opposed to the withdrawal to its pre-1967 lines, it will likely seek U.S. help in thwarting the bid.

“This is a political battle,” he told The Associated Press. He said since Washington is seeking an international alliance to fight terrorism in the region, it ought to recognize that the denial of a Palestinian state is used by militants in the region to feed radicalism.

“Giving the Palestinians their right will be reflected as stability in the region,” al-Shobaki said.

If a veto happens, he said, the Palestinians will pursue their bid for joining the International Criminal Court, where they could pursue war crimes charges against Israel.

Palestinian groups have criticized the Palestinian Authority for using the calls for bringing Israel to the court as a bargaining chip.

“The rights of Palestinian victims are not subject to compromise,” said Shawan Jabarin, general director of Al-Haq, an independent Palestinian human and legal rights group in Ramallah.

Gamal Abdal Gawad Sultan, a political science professor at the American University of Cairo, said Arab governments are reminding Washington and the international community of the urgency of the Palestinian issue.

Arab governments “are hoping to throw a rock in the water,” he said. “Going to the Security council will force … the international community, to do something.”