AP News Guide: What the Fed Did Thursday and Why it Matters
Advertisement 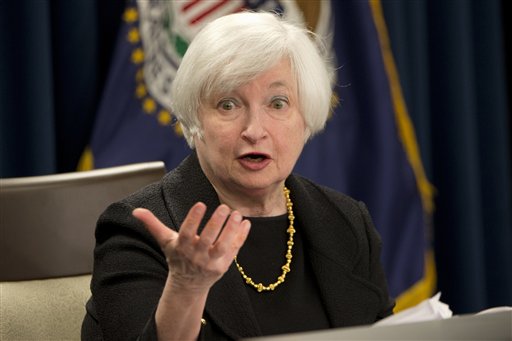 WASHINGTON (AP) — The Federal Reserve’s decision Thursday to hold a key interest rate at historic lows will extend a period of tense speculation among investors.

By delaying a rate hike for at least one further month, the Fed has announced its belief that the economy, more than six years after the Great Recession ended, still hasn’t recovered enough to overcome uncertainties abroad and persistently low inflation.

Here’s a look at what the Fed did Thursday, why it did so and what it might mean:

WHAT THE FED DID

The Fed declined to raise short-term rates. These rates help control how much money flows through the economy. When the Fed raises rates, it’s trying to reduce the flow of money to prevent the economy from overheating and igniting inflation. Lowering the rates pumps more money into the economy to feed growth.

Fed officials are trying to achieve this through the federal funds rate. This rate governs what banks charge each other for overnight loans. The Fed kept the rate at a range of zero to 0.25 percent.

The officials had first cut the rate to that record low in December 2008, after the housing bubble popped, the economy sank deep into recession and the banking system was on the brink of collapse.

Fed officials will meet again in October and December — and Chair Janet Yellen says the central bank will consider raising rates then.

WHY THE FED STAYED AT NEAR-ZERO

Parts of the economy are ailing despite the drop in unemployment. Pay growth has barely improved, for example. And millions hold jobs below their education levels or can’t find full-time work. The global slowdown emanating from Europe and China has recently thrown financial markets into turmoil, a risk specifically raised by the Fed in its statement Thursday.

In addition, the Fed’s preferred inflation measure is tracking just 0.3 percent annually, largely because of falling energy prices. The Fed has a mandate to stabilize price levels, which it has defined as 2 percent annual inflation. Too-low inflation tends to cause many people to postpone purchases, hurting consumer spending and economic growth. Ultra-low inflation also makes the inflation-adjusted cost of a loan more expensive.

The problem that Summers highlighted is that once the Fed raises rates, it becomes difficult to reverse course if the economy encounters trouble.

THE ARGUMENT FOR HIGHER RATES

The U.S. economy looks much stronger than it used to. Unemployment is at 5.1 percent, a level the Fed views as healthy. Back in the depths of the Great Recession, unemployment was 10 percent. Auto and home sales have rebounded sharply this year.

“An argument can be made for a rise in interest rates at this time,” Yellen said Thursday, even after explaining that the global uncertainties kept the Fedfrom raising rates.

But the Fed also seeks to maintain its credibility — and investors have been waiting for a rate hike for many months. When investors believe that the Fedwill do what it says, it enhances the central bank’s ability to manage interest-rate policy effectively.

In July, Yellen had told Congress that it would “likely” be “appropriate” to raise rates this year, depending on economic conditions. She reiterated that point again Thursday. But if a rate hike continues to be delayed, financial markets may find the Fed to be less trustworthy in its guidance for its next steps.

No one really knows what will happen whenever the Fed raises rates.

The Fed’s benchmark short-term rate doesn’t have a direct effect on mortgage, auto and other consumer loan rates. Those rates tend to more closely reflect yields on long-term U.S. Treasurys, which are set mainly by investor demand for U.S. debt. And the promise of higher short-term rates could cause more foreign money to stream into the U.S. economy.

So consumers and business wouldn’t likely feel the consequences of a single rate hike, at least not immediately. And to limit any potential pain, Yellen has stressed that continued rate increases would be extremely gradual.

Over a longer period, though, Fed rate hikes would spread through the economy and make it costlier to borrow. Monthly payments for home and auto loans, for example, would likely rise.

The phasing out of record-low rates could cause stocks to fall. But if the economy continues to expand, the rate hike would signal other sources of strength that could help support stock gains.
Copyright 2015 The Associated Press. All rights reserved. This material may not be published, broadcast, rewritten or redistributed.