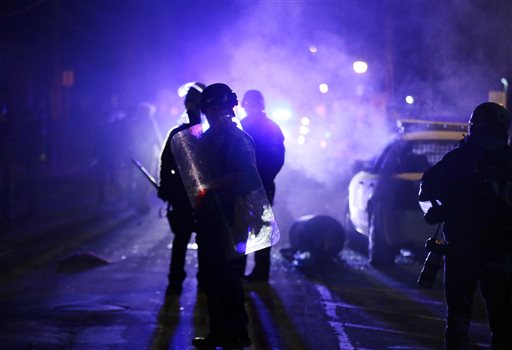 In this Nov. 25, 2014 file photo, police officers watch protesters as smoke fills the streets in Ferguson, Mo. after a grand jury’s decision in the fatal shooting of Michael Brown. (AP Photo/Charlie Riedel, File)

(CBS News) – One year ago, after the death of Michael Brown and the overblown police response to largely peaceful demonstrations, lawmakers in Washington said they had seen enough — it was time to reform the nation’s policing protocols.

This week, however, clashes between police and protesters have once again erupted in Ferguson, Missouri, illustrating that the fractured relations between police forces and minority communities are far from repaired. It’s a lesson that the deaths of Tamir Rice, Walter Scott, Eric Garner and others drove home repeatedly over the past year.

“Recent events in communities across the country have served as stark and tragic reminders of the tensions that exist in too many neighborhoods between law enforcement officers and the people we serve,” Attorney General Loretta Lynch said in Pittsburgh, Pennsylvania on Monday to the National Fraternal Order of Police. “Bridging the rifts that divide us will take all of our best efforts and cannot rest on the shoulders of law enforcement alone.”

The Obama administration and Congress have in the past year discussed several ways to reform policing efforts — often in the context of broader criminal justice reforms. While there’s a growing bipartisan consensus around criminal justice reform, the levers of power in Washington are moving in their typically slow fashion.

Man Shot by Police in Ferguson After He Fired at Officers, Police Say