The Golden State Warriors have proved yet again that they are winners and they showed their appreciation for the fans with the party of all parties.

More than 1 million fans reportedly came to the parade held by the Dubs on Monday in celebration of their win against the Boston Celtics on June 16 with a score of 103-90 in the sixth game of the series.

By 7 a.m., fans who had come from around the Bay Area on BART, Caans, bike, ferry as well as those who had traveled from as far away as the state of Washington, Ohio, Texas and Canada had lined both sides of the parade route, which ran along Market Street from Main to Eighth Street.

Before the parade began, the Warriors team members, coaches, owners and more were welcomed to a dais displaying all four of the team’s NBA Championship trophies from 2015, 2017, 2018 and 2022.

The parade started a little after 11:20 a.m. as the day reached its high of 81 degrees. Despite the heat and crowding, the atmosphere was one of overwhelming joy.

Upon arrival at the event, you’d see diverse warrior fans with ages as low as 2 and as old as 72 all decked out in merch, full of excitement. At different spots, hot dogs, cold drinks, jello shots and merch were all being sold in scattered areas of the street and the scent of marijuana lingered in the air.

While waiting for the parade to start, you’d see clumps of fans hustling to get a good view with a lot of fans even climbing to high ground like light poles and bus shelters. 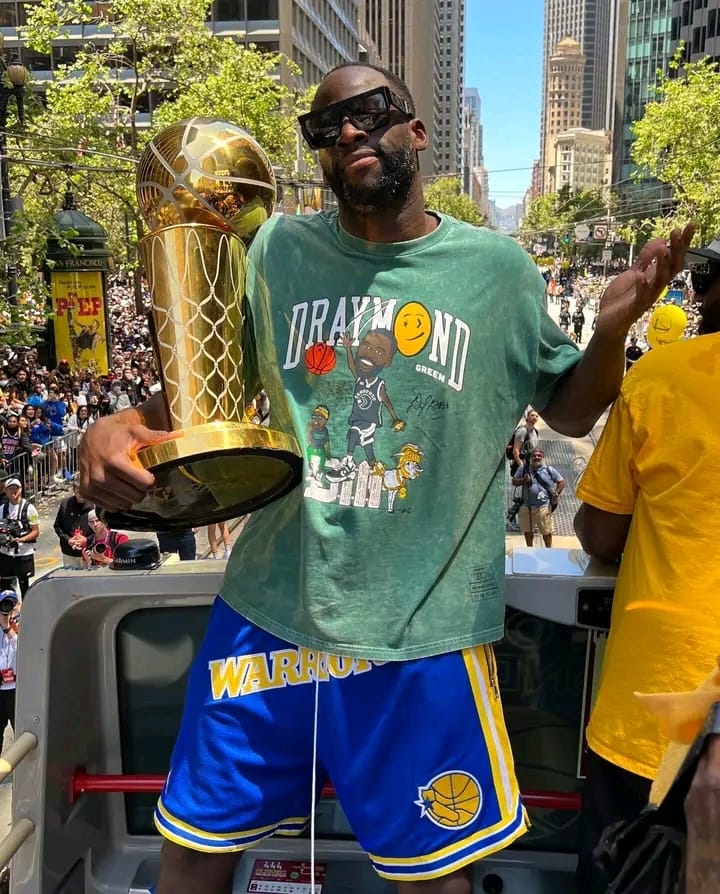 Convertible cars holding politicians and other dignitaries including three Bay Area mayors: Libby Schaaf of Oakland, London Breed of San Francisco and Sam Liccardo of San Jose. U.S. House of Representatives Speaker Nancy Pelosi was also present as was Rep. Barbara Lee who came in after celebrating Juneteenth the day before in her home state of Texas.

But the crowd roared to life at the sighting Draymond Green, whose bus was the first on the parade route.

Fans screamed their admiration and from there, the hype was permanent. From the open-roofed buses, players waved to fans and threw merchandise like glasses and shirts. Once you heard crowds of people shouting “MVP! MVP”, you knew that the star player, Stephen Curry, came down the street.

People went crazy as Curry graced the streets alongside his wife, Ayesha. 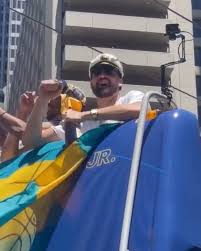 Klay Thompson rocks his captain’s hat after losing his championship cap while traveling on his boat to the parade. Instagram photo.

Curry, Klay Thompson, Draymond Green and Gary Payton II frequently got off their buses to mingle with the crowd, taking selfies, glad-handing and in Payton’s case, dousing the crowd with a water cannon.

“You guys, Steph Curry is up there!” a girl excitedly told her friends, sometimes referred to as the greatest shooter in NBA history. Jerseys saying “Curry” were most common, but so were other blue and gold outfits, including a girl wearing a Warrior’s banner as a cape.

As the parade passed, fans breached the barriers, taking over Market Street despite the best efforts of police. But there were no security problems.

The Warriors have had a tough time recently and in their remarks several players have said that the lows have made this victory all the more sweet.

After losing the past two years, no one expected them to win this year’s championship especially since several well-known players suffered injuries.

In the end, the ups and downs left everyone, both the players and the fans, in high spirits.

When asked about how winning the championship felt, especially after enduring so many injuries, Klay Thompson said, “Just going to breakfast after and seeing everyone in the neighborhood so excited…That’s what it’s about.” He continued, “It’s the small things in life that inspire you to keep going like taking a picture with an old lady or a kid.”

Other sources for this story include CBSNews, Kron4 News, USA Today and The San Francisco Chronicle.

Sarah Clemens, Makiah Hiley and Daisha Williams are Oakland School of the Arts students working as interns for the Post Newspaper Group.