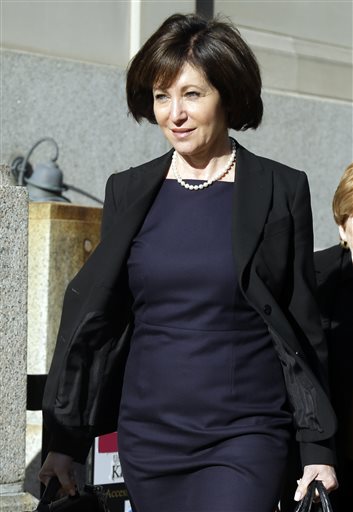 In this May 2, 2014 file photo, Francine Katz leaves the Civil Court building in St. Louis. Katz sued Anheuser-Busch in 2009 for gender discrimination, a year after resigning as vice president of communications and consumer affairs for the maker of Budweiser, Bud Light and other beers. Closing arguments are expected Thursday, May 15, 2014 in the case after nearly three weeks of testimony. (AP Photo/Jeff Roberson, File)

ST. LOUIS (AP) — A jury will continue deliberations in a gender discrimination lawsuit filed by a former Anheuser-Busch executive who claims the company paid her less than half as much as her male predecessor.

The panel of seven woman and five men deliberated four hours Thursday afternoon without reaching a verdict in the case of Francine Katz, who filed suit after she left Anheuser-Busch following its 2008 sale to Belgian brewer InBev. Katz earned roughly $1 million annually after her 2002 promotion to vice president of communications and consumer affairs but is seeking $9.4 million in back pay and damages, plus nearly $5 million in interest and an undetermined amount of punitive damages.

The 56-year-old lawyer said she earned less than half of what her male predecessor, a prominent civil rights activist, was paid.

Anheuser-Busch’s lawyers argued that Katz’s total compensation compared favorably to those in similar positions at other large U.S. corporations. They also said her duties were considerably narrower than predecessor John Jacob’s. Jacob was a former National Urban League president, member of the brewer’s board of directors and confidant to CEO August Busch III, whose family of German immigrants founded the iconic maker of Budweiser and Bud Light in the late 19th century.

“She was paid, and paid well, for her position,” defense attorney Jim Bennett told jurors during closing arguments Thursday morning, reminding the seven women and five men that Katz reported income of more than $14 million for 2008, an amount that included a severance payment after the company’s sale. “She was paid for her job duties.”

The company also argued that Katz opted to file suit only after she was passed over for an executive job with InBev and instead offered a position with lesser responsibilities, which she declined. Katz testified that the new owners’ decision played no role in her choice to sue.

But Katz’s base salary was half that of Jacob, even though her job duties extended well beyond public relations, plaintiff’s attorney Mary Anne Sedey told jurors. Katz was also the victim of a boys-club mentality that saw her excluded from corporate jets, corporate golf outings and other social opportunities, her attorney said.

In a 20-year career during which she rose from a young corporate lawyer to a role as key strategist and the beer-maker’s top female executive, Katz became the face of her hometown employer, defending the maker of Budweiser and Bud Light from overzealous regulators and anti-alcohol campaigns.

“Anheuser-Busch has minimized, understated and undervalued the work that Francine Katz did,” Sedey said.

Under Missouri law, at least nine of the 12 jurors must side with Katz for her civil claim to prevail. The jury will return to the downtown courtroom Friday morning.