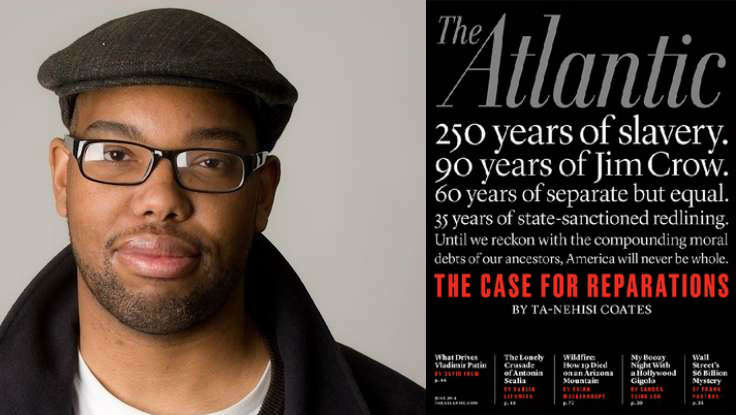 (The Washington Post) – He paid to get here. Paid with the skull-rattling pain of a metal trash can clattering down hard onto his head when he was a kid racing from thugs in West Baltimore. Paid with the jobs he lost. Paid with the sandwiches he delivered when no one wanted to pay him to do what he so desperately wanted to do, what he so unwaveringly knew he was supposed to do: to write.

For Ta-Nehisi Coates, “here” is bigger than a star turn on the stage of the Sixth and I Synagogue, where hundreds lined up down the block to hear him talk last week about his blockbuster Atlantic cover story making the case for slave reparations. No, here is a place of prominence in the stream of American thought, a perch that positions him as an ascendant public intellectual with a voice that stands out in the white noise of a wired and word-flooded era, an object of praise and a target.

At 38, Coates has already been a trenchant observer of America’s fraught relationship with race, both in his well-read Atlantic blog and in the printed magazine. But his exploration of reparations in this month’s Atlantic — a 16,000-word report that calls for a national “airing of family secrets, a settling with old ghosts” — has supercharged his profile. The piece, titled “The Case for Reparations,” intricately and provocatively traces the history of racism in the United States from slavery to recent examples of housing discrimination.