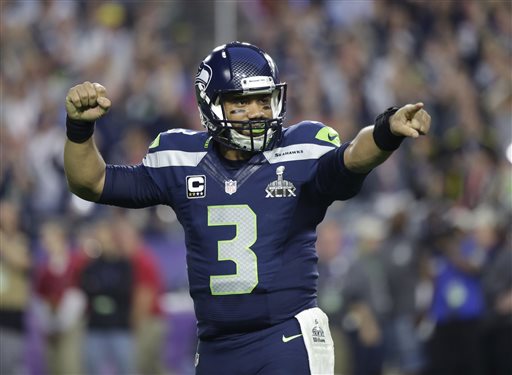 RENTON, Wash. (AP) — Russell Wilson is sticking around with the Seattle Seahawks.

Wilson signed a four-year contract extension with the Seahawks on Friday, keeping him with the franchise that took him in the third round of the 2012 draft and watched him become one of the most successful young quarterbacks in NFL history.

“Blessed to be w/ this organization for 4 more years! Can’t wait to get on field w/ the fellas!” Wilson tweeted early Friday morning.

The team formally announced the agreement shortly before Seattle’s first training camp practice, an unofficial negotiation deadline between the sides. MMQB.com reported the extension is for four years and $87.6 million. Wilson’s representatives did not immediately return messages seeking comment.

About to begin his fourth season, Wilson has led Seattle to the playoffs all three seasons, beating Denver in the Super Bowl in his second season before losing to New England in the title game last February.

He’s also been a bargain for Seattle financially. The 2015 season was the first time Wilson was scheduled to make more than $1 million.

That’s about to change.

Wilson’s contract status was the biggest story in Seattle, and the more time passed without an agreement the more conjecture grew about his long-term status with the team. There was growing concern that Wilson would play out the final season of his rookie contract and then test free agency. The Seahawks likely would have used the franchise tag to keep Wilson for the 2016 season but at a cost that would significantly hamper their salary cap situation.

Wilson’s agent, Mark Rodgers, said a number of times during the offseason that the quarterback had financially planned to be playing for $1.5 million. Wilson took out an insurance policy to protect against injury just in case no extension was reached.

Last season, Wilson threw for 3,475 yards and 20 touchdowns against just seven interceptions in the regular season. He added another 849 yards rushing and six scores, and saved some of his most memorable moments for the playoffs. Wilson overcame four interceptions in the NFC championship game against Green Bay to throw the winning touchdown to Jermaine Kearse in overtime to send Seattle to its second straight Super Bowl.

He also had the Seahawks on the cusp of a second straight title. Wilson got Seattle to the New England 1-yard line in the final seconds of the Super Bowl, only to be intercepted by Malcolm Butler, clinching the Patriots’ 28-24 victory.

For his career, Wilson is a 63 percent passer that’s been equally dynamic with his arms and his feet. He holds the NFL records for most wins in his first three seasons and was the third-youngest quarterback in league history to win a Super Bowl title.

While Seattle spent the 2014 offseason locking up the majority of its key pieces to long-term deals — Earl Thomas, Richard Sherman, Doug Baldwin — the Seahawks are facing some of the perils that come with team success.

While Wilson’s deal was the focus, the rookie contract of All-Pro middle linebacker Bobby Wagner is also up after the 2015 season. Michael Bennett made clear he would like a new contract a year after signing a $28 million, four-year deal to remain in Seattle after the Seahawks’ first Super Bowl title. And strong safety Kam Chancellor did not report to camp on Thursday, unhappy with the contract extension he signed before the 2013 season.