Will That Be a 6-Bedroom Suite or Just a Couch?
Advertisement 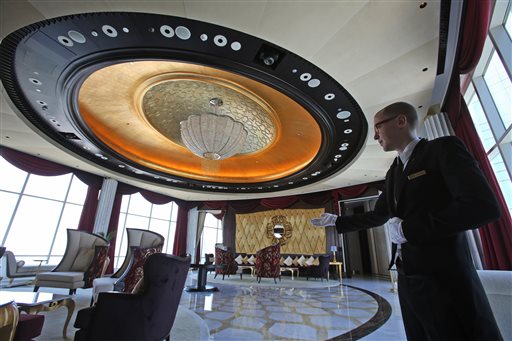 In this May 19, 2014 photo, butler Vido Kijne presents the guest welcoming pose in the Abu Dhabi Suite at the St. Regis in Abu Dhabi, United Arab Emirates. The nearly 24,000 square foot two-story suite sells for a nightly rate of $21,500. (AP Photo/Kamran Jebreili)

NEW YORK (AP) — Private elevators, personal shopping assistants, six-bedroom suites with their own postal codes. Even helipads. This is what the super-rich have come to expect from hotels.

For others, vacation now means renting someone’s apartment, a spare room, maybe just a couch — anything to save on the cost of a hotel.

As the gap between the wealthiest travelers and everyone else has widened, so has the way people are experiencing vacations. The wealthy are looking for ever-more pampering. Many others are seeking new ways to economize.

And the lodging industry is adapting — at the high and low ends — to meet the diverging needs.

Luxury hotels are catering to financial elites from Russia, China, Brazil or the Middle East who now routinely hop around the world and don’t mind dropping $20,000 a night for a glamorous accommodation.

“High-end travel in the air, on the sea and on land has never been more robust,” says Steve Carvell, an associate dean at Cornell University’s School of Hotel Administration. “There are more people with more concentrated wealth.”

Luxury hotels are arising even at iconic middle-American tourism spots such as Walt Disney World. Four Seasons will open a 444-room resort there in August with 68 suites, including a nine-bedroom royal suite sporting a 1,000 square-foot (93-square-meter) private terrace with views of the park’s nightly fireworks.

During the Great Recession, many resorts dropped “resort and spa” from their name. The idea was to appeal to corporate organizers who didn’t want trips to seem extravagant. Excess now appears back in style.

In November, Four Seasons added the phrase “and residences” to its mountain resorts in Vail, Colorado; Jackson Hole, Wyoming; and Whistler, Canada. It’s pursuing families seeking a residential experience with the pampering of a hotel staff.

The six-bedroom suite in Vail fetches $15,000 a night. You get three living rooms and a movie room. The suite includes a dedicated assistant who can arrange airport transfers, private ski lessons and after-hours shopping.

The return of extravagance reflects one characteristic of the recovery: After paring their vacations along with everyone else during the recession, the wealthy have rebounded with force. Since 2009, hotel spending by the wealthiest 20 percent of Americans has risen about 6 percent, according to inflation-adjusted data from the Bureau of Labor Statistics. The middle 20 percent are still spending nearly 3 percent less.

To stretch their discretionary dollars, middle-income vacationers are fueling one of the industry’s growth areas: “limited service” lodgings. At Marriott’s Fairfield Inn, Hyatt Place and Holiday Inn Express, you get free Wi-Fi and breakfast. But there’s no bellman, concierge or restaurants.

The idea is to draw travelers who feel priced out of full-service hotels. People can still say, “I’m staying at the Marriott,” even if it’s the Fairfield Inn, says Bjorn Hanson, dean of New York University’s hospitality school.

But many people are seeking deeper savings through increasingly popular sites such as Airbnb that arrange for people to rent rooms or apartments. The number of listed accommodations has soared since Airbnb’s founding in 2008 to 550,000 — not far below Hilton’s 685,000 rooms worldwide. Some studies suggest that Airbnb could be cutting into budget hotels’ revenue.

Robin Lynch, 34, of New York City put 14 relatives, including her in-laws, in five Airbnb facilities in Brooklyn for her wedding last year. She estimates she paid roughly $200 a night, on average, compared with the $300 she’d expected for a hotel.

“That amounts to a lot of savings over seven days,” she says.

High unemployment and flat paychecks have spurred more people not only to stay in Airbnb rooms but also to list their own homes.

Eric Worley, 30, and his girlfriend stayed at an Airbnb home in Columbus, Ohio, for $59 a night — half the lowest hotel rate they could find.

“Not only am I saving money, I’m also helping out another person … by giving them some extra money,” he says. “I’d much rather do that than have a corporation overcharge me for what is essentially the same service.”

Sometimes, the cut-rate experience goes further that visitors had expected. Ann Carman, 32, of Yellow Springs, Ohio, had always wanted to stay in an Airstream trailer. When she and her boyfriend visited Austin, Texas, in December 2013, she found one in a backyard. They weren’t alone. Sharing their accommodations were a pig named Fern, two dogs and a rooster.

“I was like, ‘They’ve got a pig in their backyard, we’ve got to stay there,'” she says.

Airbnb hosts can charge less than hotels because they typically don’t pay accommodation taxes or meet safety or disability regulations. That’s sparked grumbling from hotels — and from localities that lose out on tax revenue.

The luxury sphere is also trying to expand its base. Chains such as the Ritz-Carlton and the Mandarin Oriental are pursuing not just the uber-rich but increasingly the merely affluent.

“My father would never have stayed in a luxury hotel,” Hanson says. “He didn’t think he belonged there, even though he might have been able to afford it.”

As more modestly rich travelers have checked in, these hotels have sought to provide more for the ultra-wealthy.

With the recently opened St. Regis Abu Dhabi in the United Arab Emirates, architects considered how much privacy to provide its most sumptuous suites, says Paul James, head of Starwood Hotels and Resorts’ luxury properties.

“Part of the Abu Dhabi conversation was: ‘Where does the helicopter land?'” James says.

More of the wealthiest travelers are now booking on shorter notice — sometime less than a day. The St. Regis Mardavall in Mallorca, Spain, got a call from a 30-something German asking about the local weather. The receptionist reported 85 degrees and blue skies. The traveler booked the largest available suite and said he’d arrive in an hour.

He made the call from his private jet circling above Madrid.

The elite traveler’s experience was precisely what the Rosewood London had in mind when it opened its Grand Manor House Wing in December. The six-bedroom complex offers three living rooms, a library and a dining table for eight. It has its own street entrance and private elevator. For $42,000 a night, guests get some extra bragging rights: Their suite has its own postal code.

Mark Herron, general manager of the Four Seasons Vail, notes that his hotel recently arranged for a guest to feed elephants at a local zoo — even though the zoo was closed.

Then there was a celebrity who had a craving for Kentucky Fried Chicken. The nearest one was 28 miles (45 kilometers) way.

The hotel first tried to make it but couldn’t match the recipe. “Plus, the celebrity wanted the bucket,” Herron says.

Within an hour, the guest and his 21-person entourage had 10 buckets full of traditional and extra-crispy chicken.

Cornell’s Carvell has a theory about why anyone makes such extravagant requests.

“They’ll sometimes do it just to see if it can be done,” he says. “They don’t want to hear the word no.”

Scott Mayerowitz can be reached at http://twitter.com/GlobeTrotScott and Chris Rugaber at http://Twitter.com/ChrisRugaber.

Warren Buffett Tells You How to Turn $40 Into $10 Million