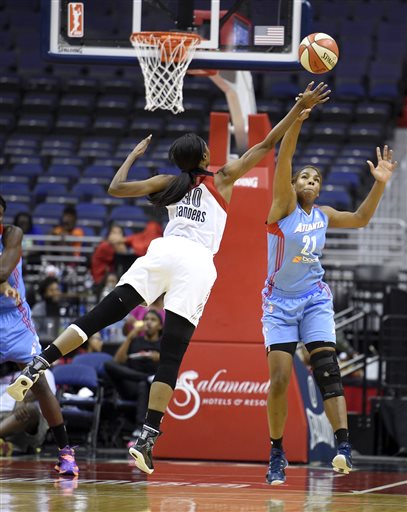 NEW YORK (AP) — Washington coach Mike Thibault was shaking his head. The veteran coach couldn’t remember a more wide-open playoff chase in theWNBA then the one that will begin Thursday night.

“It really is something,” he said. “Of the eight teams remaining, you really could say that most of them have a legitimate chance to win the title and it wouldn’t be shocking.”

Thibault’s team will begin its postseason Friday in New York. The Liberty earned the No. 1 overall seed while winning a franchise record 23 games. Still they struggled with the Mystics, dropping three of the four meetings in the regular season.

“It’s just a different mentality when you reach the playoffs,” New York center Tina Charles said. “A lot more is at stake and you forget about what happened in the regular season.”

Chicago earned the two seed in the East and will play Indiana. The Sky reached the WNBA Finals last year as a No. 4 seed before losing to Phoenix. Led by league MVP Elena Delle Donne, the Sky are hungry to make the next step and bring home a title to Chicago.

“It’s crazy how wide open it is,” Delle Donne said. “It’s amazing how talented each and every team is. I’ve never seen something like this before.”

The last time there wasn’t a clear-cut favorite to win the title was probably in 2008 when San Antonio had the best record, but Bill Laimbeer’s Detroit Shock came away with the title.

Now, Laimbeer’s team is the one with the best mark.

“The nice thing we know now is that if we win all our home games we’ll win the championship,” the Liberty coach said.

Here are a few storylines of the WNBA postseason:

RECORD TURNAROUND: The Los Angeles Sparks lost their first seven games and were sitting at 2-12 before finally getting going. No team with that bad a record to start the season had ever made the playoffs before according to STATS. The biggest reason for the change was that Los Angeles got healthy. After sitting out the first half of the season Candace Parker returned to play in the final 16 games for the Sparks. She averaged 19.4 points, 10.1 rebounds and 6.3 assists.

THE CHAMPS ARE HERE: The Phoenix Mercury finished with the second-best record in the Western Conference and are hoping to win back-to-back titles. Even missing Brittney Griner for the first seven games because of a suspension for her domestic violence arrest and Diana Taurasi for the season while she was resting couldn’t slow down the Mercury. DeWanna Bonner stepped up her play this season and Phoenix will try and become the league’s first repeat champions since the Los Angeles Sparks did it in 2001 and 2002.

TRAINER’S ROOM: Minnesota was the odds-on favorite to win the title coming into this season. The Lynx had the best record in the West, but have been bitten by the injury bug lately. Stars Lindsay Whalen and Seimone Augustus missed the final few weeks of the regular season because of a variety of injuries. Augustus hasn’t played since Aug. 19 with a foot injury while Whalen didn’t play in September because of discomfort in her Achilles tendon and bursitis in her right heel.

BACK AGAIN: Indiana returns to the postseason for a record 11th straight season. The end is drawing near for Tamika Catchings, who announced she will retire after the 2016 season. The Fever roster is mostly intact from their previous runs with the exception of coach Stephanie White, who took over after Lin Dunn retired. The Fever would love nothing more than to give Catchings another chance at a title.

FINALLY ARRIVED: The Shock will get their first chance to play in the postseason since moving to Tulsa in 2010. It will provide an opportunity for the fans to get a taste of the playoffs. Although it’s bittersweet as the franchise will be moving to the Dallas area next season. Tulsa righted itself after a 10-game losing skid following the season-ending knee injury to Skylar Diggins.

Follow Doug on Twitter at http://www.twitter.com/dougfeinberg.
Copyright 2015 The Associated Press. All rights reserved. This material may not be published, broadcast, rewritten or redistributed.