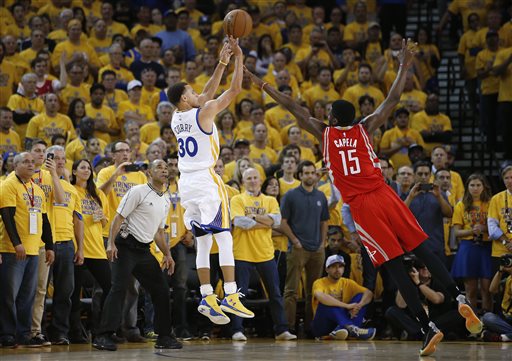 It turned out to make a huge difference.

Stephen Curry hit two free throws in the final seconds to finish with 34 points, and the Warriors rallied from a 16-point deficit in the second quarter to beat the Houston Rockets 110-106 on Tuesday night in Game 1 of the Western Conference finals.

With the Rockets seemingly ready to rout the home team, the Warriors used a smaller lineup featuring 6-foot-7 Draymond Green at center and closed the first half on a 21-4 run. Shaun Livingston scored 14 of his 18 points in the quarter, helping Golden State go ahead 58-55 at halftime.

The Warriors held off James Harden and Houston in the fourth quarter again behind their undersized lineup, which worked especially well after Rockets center Dwight Howard departed with a left knee injury.

“It really stretches people out,” Warriors coach Steve Kerr said of his lineup full of shooters. “Houston does the same thing. It was an interesting chess match, because they like to go small and we like to go small.”

Harden, the runner-up to Curry in the MVP voting, nearly brought the Rockets back without Howard in the fourth. Harden finished with 28 points, 11 rebounds, nine assists and four steals, but his late push fell short.

“You can’t give a really good shooting team easy layups and confidence,” said Harden, who shot 11 of 20 from the field. “That’s what we did in the second quarter.”

Game 2 is Thursday night in Oakland, and it’s unclear if Howard can play. Howard doesn’t think the injury will sideline him for the series.

“Hopefully Dwight is healthy and we can play big,” Rockets coach Kevin McHale said. “We didn’t have that option with Dwight out.”

Harden, serenaded with chants of “Over-rated!” from Warriors fans, mixed in a series of step-back jumpers and driving layups to help Houston even the score at 95-all midway through the fourth.

But the Warriors shut down Houston for long stretches, and Curry kept hitting shots to match Harden’s brilliance. Curry connected on a 3-pointer and converted a layup to put Golden State up 108-97 with 2:01 remaining.

“It’s entertaining basketball. We’re both supposed to help our team win and do what we can to impact the game,” said Curry, whose 2-year-old daughter Riley, playfully interrupted him during his postgame news conference.

The Rockets never relented, though, with Trevor Ariza making a 3-pointer that trimmed the Warriors’ lead to 108-106 with 14.6 seconds to play.

Curry twice caught the inbounds pass, and the Rockets were forced to foul him both times. He hit both free throws to seal Golden State’s win.

“When we go small, it’s not necessarily small. We have guys out there that can guard multiple positions,” Livingston said. “From there, it’s just feeding off our crowd.”

Curry added six rebounds and five assists, and Green had 13 points, 12 rebounds and eight assists to boost the Warriors when they needed it most.

Ariza scored 20 points and Josh Smith had 17 points and seven rebounds for the Rockets.

In the conference finals for the first time since 1976, the Warriors hardly looked like the league’s top-seeded team at the outset. Instead, the Rockets rode the momentum from a stunning 3-1 series comeback against the Los Angeles Clippers that ended with a Game 7 win in Houston on Sunday.

The only setback to Houston’s hot start came when Howard briefly left in the first quarter after colliding with Smith. Howard returned after a few minutes, and the Rockets raced out to a 49-33 lead midway through the second quarter that left the home fans stunned and silent.

With Andrew Bogut in foul trouble and the Rockets rolling on both ends, the Warriors put Green — the runner-up for NBA Defensive Player of the Year — at center and spread the court with shooters.

Green helped get stops, Livingston scored 14 points in the quarter and Curry capped the spurt with a step-back 20-footer that sent the crowd roaring even louder. Fans later broke out in chants of “M-V-P!” as the Warriors sprinted to the locker room with a 58-55 lead.

“When you try to keep your big in against our small lineup,” Green said. “It’s rough.”

Rockets: Houston is 0-5 against the Warriors this season. … The Rockets haven’t won at Golden State since Dec. 13, 2013.

Warriors: Golden State is 44-3 at home this season, including 5-1 in the playoffs. … The Warriors are 17-14 this season when trailing by at least 10 points.

The Rockets sent out seldom-used reserve Nick Johnson for the captain’s handshake with Curry, who was caught by cameras walking away and shaking his head, which created a stir on social media. Rockets captain Patrick Beverley is out with a left wrist injury and hasn’t been handling the ritual handshake in the playoffs.

Undefeated boxer Floyd Mayweather Jr., who was booed by fans during Game 5 of the Grizzlies-Warriors series in Oakland, watched from a courtside seat. Also sitting among the crowd was boxer and Bay Area native Andre Ward, who was cheered loudly when shown on the videoboards.

Antonio Gonzalez can be reached at: http://www.twitter.com/agonzalezAP

Can Anthony Johnson Complete One of the Most Unique Career Turnarounds?