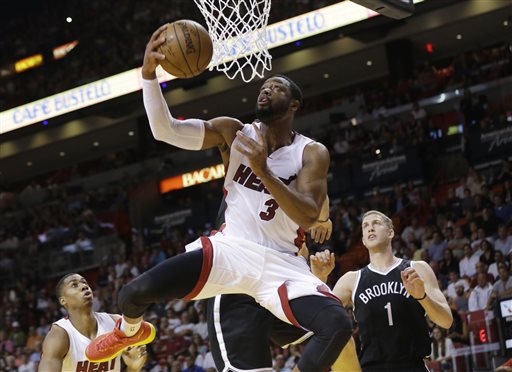 In this Jan. 4, 2015, file photo, Miami Heat guard Dwyane Wade (3) shoots in front of Brooklyn Nets center Mason Plumlee (1) during the first half of an NBA basketball game in Miami. Wade announced Monday, June 29, 2015, that he will elect to become a free agent. (AP Photo/Lynne Sladky, File)

MIAMI (AP) — The relationship between Dwyane Wade and the Miami Heat is about to be tested like never before, and the most accomplished player in franchise history may soon have a new home.

Wade will become a free agent Wednesday, electing to pass on a $16.1 million option for next season and see what he’s worth on the open market. His decision was announced Monday afternoon by a spokesperson in a 61-word press release, after both Wade and his agent Henry Thomas did not respond to requests for comment.

Wade played for all three of Miami’s NBA championship teams. He’s been an All-Star in 11 of his 12 seasons, and is Miami’s all-time leader in plenty of categories including games, points, assists and steals.

“We want Dwyane back,” Heat President Pat Riley said last week. “There’s no doubt about that.”

There’s doubt it will happen.

As is usually the case, it will come down to money. Wade has left about $27 million on the table during his career and wants those sacrifices rewarded in his next contract. But he’s missed 25 percent of Miami’s regular-season games over the last four seasons and that, combined with him turning 34 next season, likely is weighing heavily on how much the Heat want to offer.

He averaged 21.5 points this past season, 11th-best in the NBA and third-best in the Eastern Conference. His points-per-48-minutes of 32.4 ranked relatively close to elite scorers like Stephen Curry (34.9), LeBron James (33.6) and Carmelo Anthony (32.5). The Heat wound up missing the playoffs at 37-45, in large part because Chris Bosh missed half the season after a blood clot was found in one of his lungs.

“Obviously, our team went through a lot of bizarre stuff throughout this year but I thought individually, what I was able to do in 30, 31 minutes, I thought I was as efficient as I could be,” Wade said in an interview with The Associated Press when the season ended. “I always think I can do better, but what I was able to accomplish … I thought was pretty good individually.”

Monday was a hectic day for the Heat.

The morning had Justise Winslow, the No. 10 overall draft pick out of Duke, arrive for his introductory news conference where he was flanked by Riley and Heat coach Erik Spoelstra, who both raved about Winslow’s maturity. Hours later, small forward Luol Deng announced through agent Herb Rudoy that he will exercise his option to play for Miami next season in a $10.1 million deal.

The next move belonged to Wade, who is headed to free agency again. ESPN was first informed of his decision.

Wade strongly considered an offer from Chicago in 2010 and is likely to get interest this time from the Los Angeles Lakers (he and his wife Gabrielle Union have a home there), the New York Knicks (he spends plenty of time in that city) and other clubs.

Miami plans to be first in line to make its free-agent case, when the windows open at 12:01 a.m. Wednesday. It’s unclear if they will speak to Wade directly or just his representatives, if such a meeting occurs.

All this comes with risks for both Wade and the Heat.

On one hand, Wade might not find anyone willing to pay as much in the short term as Miami would have this season. On the other, the Heat could lose the face of their franchise, their all-time scoring leader and someone revered in the Miami market.

Wade told the AP after the season that he wants to stay in Miami, and even was photographed wearing a Heat cap in recent days at his fantasy camp. But it’s also clear that he wants to still be paid like an elite player, and that could force the Heat into making a tough decision.

Bosh received a $118 million, five-year deal last summer. Point guard Goran Dragic is expected to stay with the Heat, but his free-agent deal could be another five-year commitment in the range of $90 million. Center Hassan Whiteside is expected to command big money in the summer of 2016 when megastars Kevin Durant and Anthony Davis could be free agents.

“The one thing that I’ve learned about free agency is that when a player has an opportunity to be a free agent, you give him the space and the time to think about that,” Riley said. “I don’t care how long he’s been with the franchise. We love Dwyane.”

NBA Free Agents 2015: Updated Rumors for Players Predicted to Be on Move