Volkswagen Sold More Vehicles Than Toyota in First Half
Advertisement 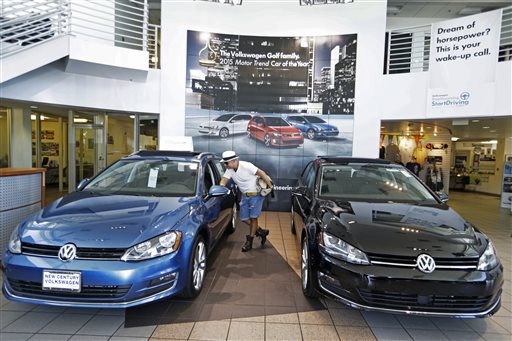 In this Thursday, July 2, 2015, photo, customer Armando Barillas checks the interior of a vehicle for sale at the New Century Volkswagen dealership in Glendale, Calif. Volkswagen overtook Toyota in global vehicle sales for January-June, the first time the German automaker has come out top in the intensely competitive tallies. (AP Photo/Damian Dovarganes)

TOKYO (AP) – Volkswagen overtook Toyota in global vehicle sales for January-June, the first time the German automaker has come out top in the intensely competitive tallies.

Japanese automaker Toyota Motor Corp. said Tuesday it sold 5.02 million vehicles in the first six months of this year, down 1.5 percent from the same period the previous year, as sales struggled especially in the languishing Japanese market.

Volkswagen AG said earlier this month that it sold 5.04 million vehicles during the same period. Sales were robust in Europe and North America but fell in China, usually a strong market for the company. Its first-half sales were 0.5 percent down from the same period in 2014.

Detroit-based General Motors Corp., the top-selling automaker for more than seven decades until being surpassed by Toyota in 2008, finished third at 4.86 million, down 1.2 percent from a year ago.

GM retook the sales crown in 2011, when Toyota’s production was hurt by the quake and tsunami in northeastern Japan.

Toyota, which makes the Prius hybrid, Camry sedan and Lexus luxury models, made a big comeback in 2012, and has been the world’s top-selling automaker for the past three years.

In the first half, Toyota’s sales grew in U.S., Mexico and China.

Volkswagen sold 10.14 million vehicles in 2014. VW makes the Beetle and Golf cars, and also has the Porsche, Bugatti and Audi brands under its group.

GM, which makes the Cadillac and Opel cars, was third at 9.92 million vehicles in global sales last year.

The ranking could still change when numbers come in for the entire year.

None of the automakers say they are trying to be No. 1 for the sake of being No. 1. But the industry crown is coveted and significant.