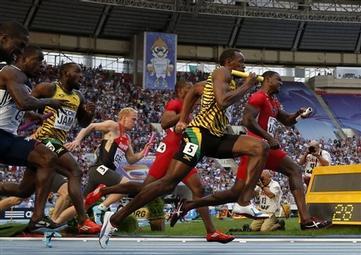 MOSCOW (AP) — And with three gold medals in Moscow, Usain Bolt, the Jamaican great, became the most successful athlete in the 30-year history of the world championships.

The 4×100-meter relay gold Sunday erased the memories of the 100 title he missed out on in South Korea two years ago because of a false start. And, combined with an identical 100-200-relay triple from Shelly-Ann Fraser-Pryce, Bolt was instrumental in giving Jamaica the first sweep of the six sprint events.

Bolt was still trailing Justin Gatlin when he got the baton on the anchor leg, but a botched U.S. handover and his superior speed were enough to carry him, and Jamaica, to victory.

He gritted his teeth, dipped at the line, and then grinned with relief.

“I wasn’t really worried about Justin. I knew if he got the baton in front of me, I could catch him,” Bolt said. “So it was just going out there to run as fast as possible.”