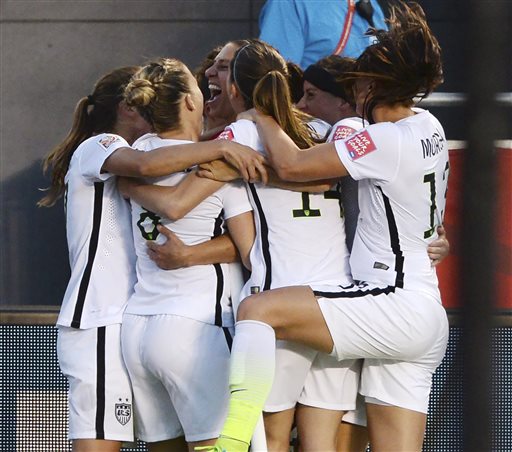 U.S. players celebrate a goal by Carli Lloyd (10) against China during the second half of a quarterfinal match in the FIFA Women’s World Cup soccer tournament, Friday, June 26, 2015, in Ottawa, Ontario, Canada. (Sean Kilpatrick/The Canadian Press via AP)

(CBS News) – The U.S. women’s soccer team is in a rare position as they prepare to face Germany, the wold’s top-ranked team, Tuesday night. While the two countries have played each other 29 times, and Germany has won only four of them, the U.S. is the underdog at the Women’s World Cup semifinals, reports CBS News correspondent Jericka Duncan.

Carli Loyd’s game-winner against China was a thing of beauty — but also a rarity — for an American team that has scored just seven goals in its five World Cup games. The Germans have found the back of the net 20 times.

U.S. midfielder Ali Krieger said getting a quick start against Germany could be crucial.

“I think the first few minutes are really important, but we have to stay calm. We have to connect the first few passes to get comfortable on the ball and get into the game and then see what they give us,” she said.

Diddy Arrested After Fight with UCLA Football Coach; 50 Cent to the Rescue