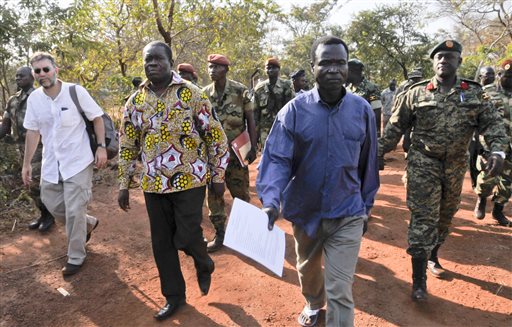 In this photo taken Friday, Jan. 16, 2015 and released by the Uganda People’s Defence Force (UPDF), a man said by the UPDF to be the wanted Lord’s Resistance Army (LRA) commander Dominic Ongwen, center-right, is handed over by the UPDF to the African Union Regional Task Force who later handed him over to Central African Republic authorities, in the Central African Republic. (AP Photo/Uganda People’s Defence Force, Mugisha Richard)

THE HAGUE, Netherlands (AP) — A commander from a fearsome Ugandan rebel group known for abducting and torturing children was taken into custody early Wednesday at the International Criminal Court, where he faces charges including murder and enslavement, the U.S. Ambassador to the United Nations said.

Dominic Ongwen was flown out of Africa on Tuesday. His arrival in The Hague marks the first time a member of the Lord’s Resistance Army, which is led by the notorious warlord Joseph Kony, has faced international justice.

Ongwen’s transfer from the Central African Republic to The Hague, “is a welcome development in the international community’s campaign to counter the LRA’s dehumanizing violence, and to bring perpetrators to justice after more than two decades of the LRA’s brutal campaign of torture, rape and murder,” Ambassador Samantha Power said.

The court did not immediately confirm Ongwen’s arrival at its detention center near the Dutch North Sea coast, two weeks after he surrendered in the Central African Republic. Ongwen will undergo medical tests and will likely make his first court appearance within days.

Ongwen was handed over to the ICC on Tuesday in Bangui, the Central African Republic capital, where he was put on a plane to The Hague, U.N. spokesman Stephane Dujarric said.

His extradition comes nearly a decade after authorities first charged him and four other Lord’s Resistance Army top commanders. Three have since died and only top leader Kony remains at large.

Ongwen has been accused of atrocities against civilians in Uganda and in parts of Central African Republic, South Sudan and Congo. For more than a quarter of a century, the LRA has terrorized central Africa with a campaign of killings, torture, kidnappings, using child soldiers and sex slaves.

“The transfer of Dominic Ongwen to the ICC is a major step for those affected by the LRA’s long history of crimes,” said Daniel Bekele, Africa director at Human Rights Watch. “All eyes will now be on the ICC to deliver fair, meaningful justice that will resonate with the LRA’s victims.”

After years of hiding in the remote forests of central Africa, Ongwen said it was time to face the charges against him. He surrendered on Jan. 6 in the Central African Republic.

“I did not want to die in the bush, so I decided to follow the right path and listen to the calling of the ICC,” said Ongwen, in the Acholi language on a video taken by the Ugandan army.

Ongwen’s surrender is seen as a severe blow to Kony and the LRA, who are being hunted down by the Ugandan army with help from American military advisers.

The U.S. placed a $5 million reward for information leading to Ongwen’s capture. Rebels in a remote corner of Central African Republic where he was found say they handed him over to authorities and now deserve the reward money.

“Today’s developments give hope — to the survivors, to the four countries affected by the LRA, and to their partners around the world — that the nightmare of the LRA can be brought to an end,” U.S. State Department spokesperson Jen Psaki said in a written statement. “We call on the remaining LRA members to follow the lead of the more than 250 individuals who have left the LRA since 2012 to put down their arms and return home.”

Ban called it “a step forward in efforts to bring justice to the thousands of victims of LRA violence” in Uganda and other African countries over the past 28 years.