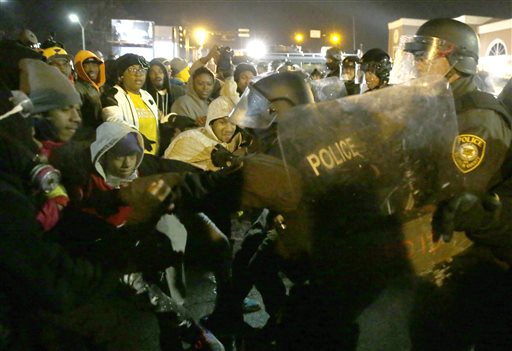 Police officers confront protesters Tuesday, Nov. 25, 2014, in Ferguson, Mo. Missouri’s governor ordered hundreds more state militia into Ferguson on Tuesday, after a night of protests and rioting over a grand jury’s decision not to indict police officer Darren Wilson in the fatal shooting of Michael Brown, a case that has inflamed racial tensions in the U.S. (AP Photo/David Goldman)

by Bridjes O’Neil
Special to the NNPA from The St. Louis American

Members of the Missouri Legislative Black Caucus met with those from the Organization for Black Struggle on Friday at Greater St. Marks Family Church in Ferguson. They discussed legislative strategy for the upcoming session and ways to incorporate OBS’ Quality Policing Initiative into legislation at the state, county, and local levels.

OBS members hand-delivered the policy proposal to legislators in Jefferson City on Wednesday, January 7, along with an invite to attend Friday’s meeting. They had also disrupted the opening ceremony in the Senate chamber by chanting and dropping banners. One banner read, “You’ve got mail.”

“With the start of the year and a new legislative session,” the letter read,  “we, the people,  are committed to holding our elected officials accountable to us as  constituents.”

Signed by OBS Executive Director Montague Simmons, the letter went on to say that the “systematic lynching” of Black people at the hands of police has continued since the death of Michael Brown Jr. on Aug. 9 —and that the judicial system has failed to hold police to the same level of accountability. It warned that the community is dealing with a “structural problem” requiring a “structural solution.” That “structural solution” is the Quality Policing Initiative, a broad policy proposal that organizers demand lawmakers use as a blueprint to transform the state’s broken policing system.

Three months ago, back when protests were more frequent, state Rep. Michael Butler said he knew many of those same people would be in Jefferson City come January. From a list of 20 Caucus members invited to attend the meeting, Butler was among the handful that showed up. He was joined by state Reps. Courtney Curtis, Sharon Pace, Joe Adams, and Tommie Pierson. Pierson is also pastor of Greater St. Mark Family Church.  It seemed to be a disappointing number for OBS organizer Kayla Reed.

“When I think of where I live, I’m looking at my Representative right now,” Reed said. “When I think about who my Senator is and the fact that she’s not here is very concerning.”

Despite their absence, Senators Jamilah Nasheed and Maria Chappelle-Nadal have been outspoken throughout the protest movement. On Wednesday, Chappelle-Nadal filed a formal “remonstrance” against Governor Jay Nixon calling for his resignation or impeachment, citing “failed and incompetent leadership.” In December, she also introduced legislation governing police conduct.

Reed spoke of a shift in the protest movement – from identifying problems to finding solutions.

“Protesting is not a solution,” she said. “It’s a tactic to force a solution.”

Most at the meeting agreed that there should be a greater focus on accountability, which comprises a large portion of the Quality Policing Initiative. The proposal tackles five phases of policing authority: recruitment, training, deployment, accountability and advancement.

Parts of the proposal outlines the creation of “use of force” and “search and seizure” reports along with a media accountability system – in which body and dash camera data is controlled by a citizen’s review board.

With a pen in hand, Butler listened intently with an occasional head nod as he jotted down notes on the back of a piece of paper.

“You already have changes to the racial profiling act, municipal reform, and some policing tweaks that we have tried in the past year. That I’m sure these guys will re-file this year,” Butler said.

Simmons said there’s no greater time than now to effect real change. Although he seemed a bit concerned with attempting to pass any legislation with a Republican super-majority in both the House and the Senate. All is not lost, according to Curtis.

“There are some good Republicans we can work with,” he said.