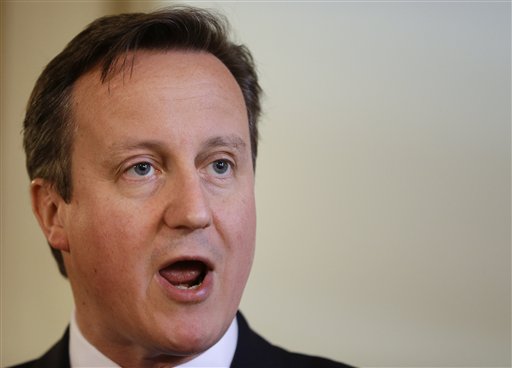 LONDON (AP) — British Prime Minister David Cameron has ordered the country’s intelligence agencies to investigate the Muslim Brotherhood, amid reports the group is using London as a base to plan militant activities after a crackdown in Egypt.

The prime minister’s office said Tuesday that the Cameron had commissioned a review “into the philosophy and activities” of the Brotherhood and the government’s policy toward the organization.

Cameron said “we will only get our policy right if we fully understand the true nature of the organization that we are dealing with.”

He told reporters at a press conference with Italian premier Matteo Renzi that it was important to understand the organization’s beliefs, its stance on violent extremism, its links to other groups and its presence in Britain.

Muslim Brotherhood leader Mohammed Morsi was ousted as Egypt’s president in July, and Egypt has declared it a terrorist group. The Brotherhood says it is a peaceful charitable and political organization, but opponents accuse it of orchestrating a wave of deadly attacks on Egyptian police and military targets.

Among the questions for Britain’s investigation is whether the group was behind a bomb attack on a tourist bus in the Sinai peninsula that killed three South Koreans and the Egyptian driver.

Britain’s investigation will be led by John Jenkins, Britain’s ambassador to Saudi Arabia — a country that has joined Egypt in declaring the Brotherhood a terrorist organization.

The Brotherhood has long had a presence in Britain, but the government is investigating whether its ranks have been swelled by members fleeing Egypt.

In a statement, the Brotherhood said it would cooperate with the British probe and insisted it “follows a peaceful ideology.”

African Women See More Rights on Paper – But Where Are The Benefits?

Campaign to Block World Bank from ‘Sowing Poverty’ is Launched