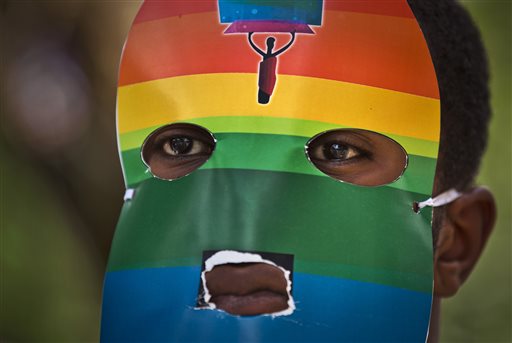 In this Feb. 10, 2014 file photo, a Kenyan gay wears a mask to preserve his anonymity as they stage a rare protest, against Uganda’s increasingly tough stance against homosexuality outside the Uganda High Commission in Nairobi, Kenya. (AP Photo/Ben Curtis, File)

(BBC) – Ugandan police harass and physically abuse gay people in custody, a report by a human rights group has said.

Homosexual acts are illegal in Uganda and there are plans to introduce new harsher legislation.

Uganda’s internal affairs minister said the allegations were not true but his office would look at the findings.

Aronda Nyakairima told the BBC that the Ugandan government did not discriminate against anyone.

Explosions in Nigerian Towns in North Kill at Least 34