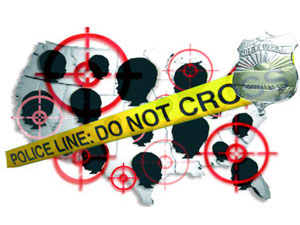 by Saeed Shabazz
Special to the NNPA from The Final Call

NEW YORK (FinalCall.com) – Including Michael Brown, five unarmed Black men have been killed by police officers across the nation. Tensions are high as many Black communities say ‘enough is enough’.

The men include: Ezell Ford, 25, a mentally disabled man in Los Angeles shot three times; John Crawford, shot and killed in a Walmart in Beaver Creek, Ohio while holding a BB gun he picked up while in the store; Armand Bennet, 26, in New Orleans shot three times in the head and Jeremy Lake, 19, of Tulsa, Okla. shot by an off-duty police officer— his crime was walking down the street with the officer’s daughter, according to reports.

In New York, at Final Call press time the International Action Center (IAC) planned to hold an emergency protest in front of NYPD headquarters, themed, “We Are All Michael Brown— The Cops Are The Criminals Not Youth of Color!”

At least two of the four law enforcement agencies deployed in Ferguson up until the evening of Aug. 14—the St. Louis County Police Department and the St. Louis Police department— received training from Israeli security forces in recent years; therefore we now have an international connection to U.S. police brutality, Sara Flounders, co-founder of IAC told The Final Call.

IAC also published a statement from Palestinian organizations and individuals that stand in solidarity “with their brethren” in Ferguson, MO.

“We recognize the disregard and disrespect for Black bodies and Black life endemic to the supremacist system that rules the land with wanton brutality. Your struggles through the ages have been an inspiration to us as we fight our own battles for basic human dignity,” the statement continued.

It was signed by several individuals and groups including, American Muslims for Palestine, International Solidarity Movement in Palestine, Students for Justice in Palestine Univ. of New Mexico, Bay Area Intifada, Palestinian Americana Women Assoc. and the Harvard Palestine Solidarity Committee.

“It doesn’t matter that there is an African American President of the United States or that Blacks are mayors of major American cities, run Fortune 500 companies or are pace setters as high paid and adored hip hop moguls, entertainers and athletes; the killing of Black men continues,” wrote Dr. Ron Daniels in the article, “State of Emergency in Black America: The Killing of Black Men Continues – A Call to Action”.

“When will the police shootings stop? The killing of Blacks in America won’t stop, because it is part of a total system of White racism fueled by White supremacy, and is no different from the lynchings of the past,”  Frances Cress Welsing, psychiatrist and author told The Final Call.

She called police killings a systemic response to “White genetic survival”. As Whites see themselves becoming a minority in America— the White male collective uses increasingly bigger guns against Blacks she said.

Some advocates charged that a more forceful presidential leadership and response is needed.

“I agree that the response from Washington, D.C. has been lacking,” said Dr. Ray Winbush, director at the Institute for Urban Research at Morgan State University in Maryland.  People must understand that the anger now on display in Ferguson is part of a national response, he told The Final Call.

“Be aware that the people in Ferguson are aware of police killings of Oscar Grant, Sean Bell and Eric Garner; and they are saying we have had enough.”