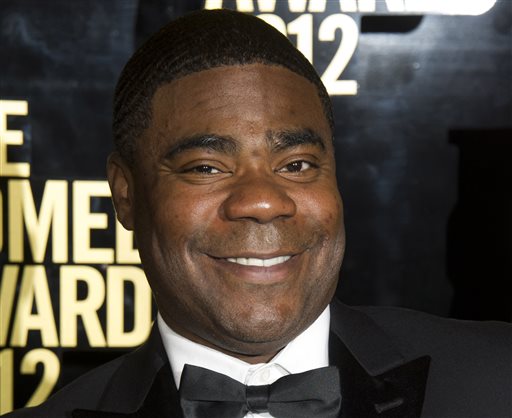 This April 28, 2012 file photo shows Tracy Morgan at The 2012 Comedy Awards in New York. Actor and comedian Tracy Morgan has been upgraded to fair condition following the New Jersey highway crash that badly injured him and killed one of his friends, his spokesman said Monday, June 16, 2014. (AP Photo/Charles Sykes, File)

(New York Daily News) – Photos of funnyman Tracy Morgan sitting in a wheelchair gave a rare glimpse into his courageous battle to recover from the New Jersey wreck that left his life — and now his career — in peril.

Photos obtained exclusively by the Daily News show Morgan holding a small child Wednesday near Mount Sinai Hospital. The wheelchair is part of the new reality for the popular comedian, who was seriously injured on June 7.

“This is the way he is now,” Morgan’s lawyer, Benedict Morelli, told The News.

“He has to use the wheelchair anytime he’s out and about. He can’t do that many steps. He’s still unsteady. He has this head injury, and his leg isn’t totally better yet,” Morelli said. “He has to struggle to inch along.”