Toyota Remains at Top in Sales After First Half
Advertisement 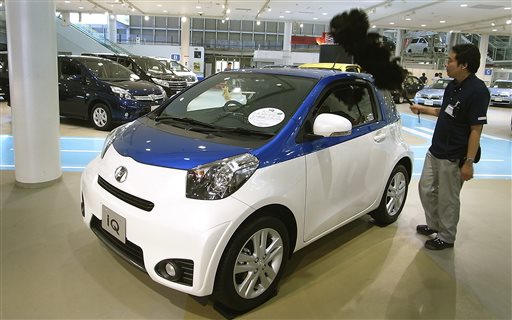 A worker cleans an IQ compact car at a Toyota showroom in Tokyo, Wednesday, July 30, 2014. Toyota remains No. 1 in global vehicles sales after the first six months of this year, followed by Volkswagen which bumped General Motors out of second place as the U.S. automaker grapples with a recall scandal. (AP Photo/Eugene Hoshiko)

TOKYO (AP) — Toyota remains No. 1 in global vehicles sales after the first six months of this year, followed by Volkswagen which bumped General Motors out of second place as the U.S. automaker grapples with a recall scandal.

Sales in Japan were strong because of a rush to beat the rise in the consumption tax that kicked in from April 1, according to Toyota.

Toyota’s vehicle sales soared 12 percent in China, while they also held up in North America, growing 5 percent. Toyota also did well in Europe, with sales edging up 8 percent.

Toyota declined comment on being No. 1. Toyota officials say they are merely trying to satisfy customers, one car at a time, and not competing to be at the top.

All auto officials tend to make such comments in public, but there is no question of the intense competition.

Volkswagen of Germany sold 4.97 million vehicles in the first half, outpacing General Motors Co. at 4.92 million vehicles, according to figures released earlier this month. VW’s sales are growing faster than that of Detroit-based GM, which is grappling with a major recall over faulty ignition switches.

Toyota, which makes the Camry sedan, Prius hybrid and Lexus luxury models, finished at the top last year with a record 9.98 million vehicles. GM was second and VW third.

Toyota expects to sell more than 10 million vehicles this year, a milestone in the industry.

GM had been the top-selling automaker for more than seven decades before losing the title to Toyota in 2008. GM retook the sales crown in 2011, when Toyota’s production was hurt by the quake and tsunami in northeastern Japan.

Toyota made a powerful comeback in 2012, and appears on track to retain its title this year.

The battle among the three automakers remains tight, fought out in still largely untested territory in new markets.

Toyota is a relative latecomer in China, for instance, whereas GM and VW are longtime powerhouses there. Toyota, however, is rapidly catching up.