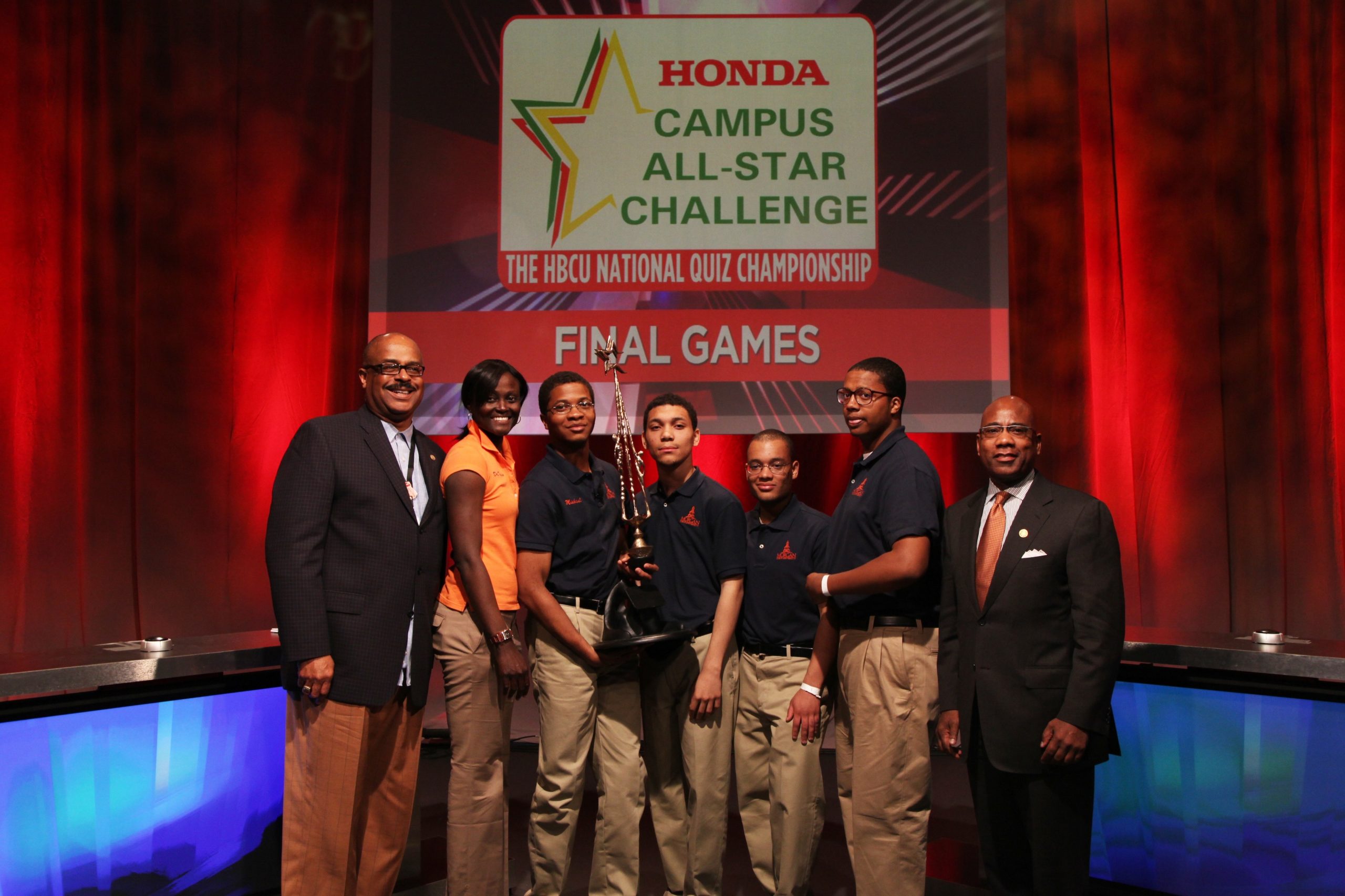 The team from Morgan State University celebrates on stage after their win over Oakwood University at the 2012 Honda Campus All-Star Challenge. On April 7-8, more than 250 students from 48 Historically Black Colleges and Universities will participate in the 2013 Honda Campus All-Star Challenge – the nation’s only academic competition among HBCUs. The winner will walk away with $50,000 in grant money for their University.

Torrance, Calif., March 20, 2013 – After hundreds of hours of studying, countless practice matches, and almost a year of preparation, one question stood between Morgan State University’s academic team and the title of 2012 National Champion: “Who was America’s only chief executive never elected as president or vice president?” Now, one year later, Morgan State returns to defend its title at the Honda Campus All Star Challenge (HCASC), an intense academic competition among the best and brightest students from Historically Black College and Universities (HBCUs). The action-packed, suspense-filled National Championship Tournament (NCT) takes place April 7 – 8 on the campus of American Honda Motor Co, Inc., a culmination of the year-long program.

More than 250 students from 18 states representing 48 HBCUs have spent many months training for their chance at the National Championship by participating in pre-NCT matches.  A win will not only give them bragging rights as the nation’s top academic HBCU, but will also give them the opportunity to win a share of the more than $300,000 in institutional grants awarded annually by Honda.  The two-day competition will test students’ knowledge of history, science, literature, religion, the arts, social science, and popular culture.

The competitors will be split into eight divisions and will compete in a modified round-robin format. The top two teams from each division will advance to the “Sweet 16” and will compete in a single elimination playoff.  The final two teams that emerge from the playoffs will battle for the title of National Champions and the grand prize of $50,000. The grand prize, along with the other institutional grants, will support academic activities at the participating HBCUs.

The 24th annual Honda Campus All-Star Challenge returns for the second year to the corporate headquarters of American Honda Motor Co., Inc., with the goals of supporting education and bringing the HBCU students and Honda closer together.

HCASC is one of Honda’s largest and longest running philanthropic initiatives in the United States.  Throughout its 23-year tenure, the program has touched more than 100,000 students and awarded more than $7 million in grants.  In addition to providing students a venue for friendly competition, the program encourages relationship building, intellectual excellence, and the development of values that define good character.

“My favorite part of being on this team has been bonding with our teammates and coach.  There have been a lot of incendiary moments, but they’ve made us stronger.  I’m looking forward to getting ready for next year.”

“This is everybody’s first year on the team, and to try to figure out how to meld what they know with what they need to know, takes a journey that builds a relationship of trust. It’s been a beautiful relationship with my team.”

“The Honda Campus All-Star Challenge brings together great minds from Historically Black College and Universities around the nation and offers them a friendly and competitive environment to demonstrate their intellect, hard work and dedication.  We are proud to support HCASC as it continues to exemplify HBCUs’ academic excellence, enrich our nation’s youth, and invest in one of the country’s largest pipelines for professional, artistic, and academic talent.”

For more information on the Honda Campus All Star Challenge and a list of the 48 participating HBCUs, please go to http://www.HCASC.com.

Honda supports a variety of initiatives aimed at advancing education and creating experiences of discovery that help aspiring students see and achieve their own dreams. The Honda Campus All-Star Challenge, along with the Honda Battle of the Bands, are two of Honda’s major initiatives supporting Historically Black Colleges and Universities and helping young people pursue their dreams.

Wells Fargo Commits $520,000 for High School Students Across the U.S. to Use for College or Other Expenses