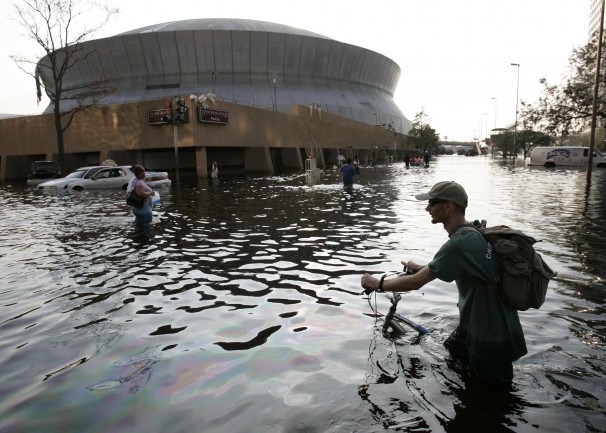 A man pushes his bicycle through flood waters near the Superdome in New Orleans on Aug. 31, 2005. (Eric Gay/AP Photo)

(The Huffington Post) – The Chicago Tribune apparently decided the approaching 10th anniversary of Hurricane Katrina was a great hook for an op-ed extolling the cleansing and restorative virtues of a natural disaster that left 1,833 people dead.

“In Chicago, Wishing For A Hurricane Katrina,” written by Tribune Editorial board member Kristen McQueary, drew immediate backlash online. The original headline and more offensive passages were quickly scrubbed without any annotation, but the original text and headline can be read here.

I find myself wishing for a storm in Chicago — an unpredictable, haughty, devastating swirl of fury. A dramatic levee break. Geysers bursting through manhole covers. A sleeping city, forced onto the rooftops.

That’s what it took to hit the reset button in New Orleans. Chaos. Tragedy. Heartbreak.

As Anniversary and Protests Fade, Ferguson Looks Ahead