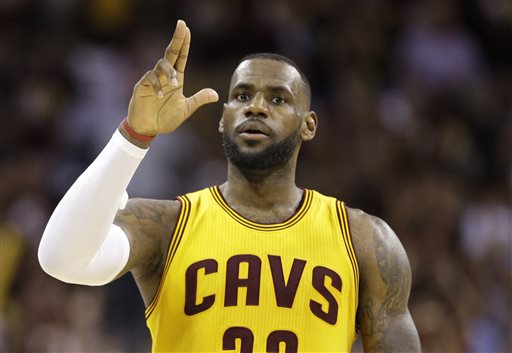 Cleveland Cavaliers forward LeBron James (23) celebrates a play against the Golden State Warriors during the second half of Game 3 of basketball’s NBA Finals in Cleveland, Tuesday, June 9, 2015. (AP Photo/Tony Dejak)

(Cleveland.com) – This time, free agency for LeBron James could be a drawn-out process or a fairly quick transaction. It all depends on how things shake out come July 1.

The contract situations of Kevin Love, Tristan Thompson, J.R. Smith, Iman Shumpert and to a certain degree Brendan Haywood are expected to be resolved before the Cleveland Cavaliers re-sign the world’s most dominant player.

The four-time MVP has a player option deadline of Monday, and he will decline to pick up that deal for next season.

Broncos Would Have Been Crazy Not to Talk Peyton Manning Trade