The Story of Tinoris Williams: Did He Have to Die?
Advertisement 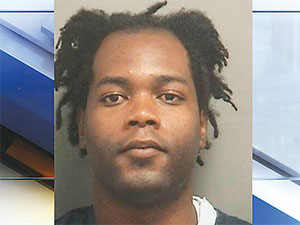 In the 10th installment of the Florida Courier’s series on Blacks and mental health, we learn that community institutions are building partnerships with law enforcement to prevent needless killings of people with mental illnesses.

After years of intermittent treatment for mental illness, Tinoris Williams was shot to death by a Palm Beach County deputy sheriff.

Tinoris Williams’ life ended violently on April 7 when he was shot in the head by a Palm Beach County deputy sheriff. The family of the 31-year-old said he had an extensive history of mental illness and needed treatment.

Earlier this month, the Williams family’s attorney announced their intent to file a wrongful death lawsuit against the sheriff’s office, stating that Deputy Ernest Cantu used excessive force when he shot and killed the “mentally ill’’ Williams at an apartment complex in West Palm Beach.

Cantu and other deputies had been investigating reports of a burglary in the area when Cantu entered an apartment and was allegedly attacked by Williams, who was unarmed.

The sheriff’s report states that a “violent struggle’’ ensued before Williams was shot.

Many charges dropped
Sheriff Ric Bradshaw called Williams a “dangerous, violent felon’’ after the shooting, but records show that of the more than 30 arrests dating back to 2000, Williams had never been convicted of a felony.

And according to a WPBF TV 25 News investigation, of 26 cases and 35 charges, 28 were dropped or Williams was found not guilty. He spent a total of 70 days in jail and in some cases received probation time. The only violent conviction was one count of battery from 2010.

Insanity defense
In 2012, he was found not guilty of reason of insanity and took mood-altering medication assigned by a psychiatrist.

An arrest report at the time shows that he had thrown a brick through his mother’s window and threatened to kill her and himself.  When deputies showed up, he said he was “a Martian” and was acting under the authority given to him by the United States Constitution.

Jailed, not treated
A report titled “The Treatment of Persons with Mental Illness in Prisons and Jails,’’ states that there are 10 times more mentally ill Americans in prisons and jails than in state psychiatric hospitals. There were an estimated 356,268 inmates with severe mental illnesses in U.S. prisons and jails. There were only 35,000 mentally ill individuals in state psychiatric hospitals.

“Regarding his criminal record and the fact that he’s been Baker Acted so many times, this is not uncommon with someone who is mentally ill,” Miami attorney Jasmine Rand said earlier this month during a press conference. Rand is representing Williams’ family.

“The majority of the charges were dropped because the court found he was mentally ill…The proper place for someone who is mentally ill is seeking treatment. That’s what the parents wanted – treatment for their son.”

Vicky Williams said at a press conference that her son was a good student through high school. When he returned home from college, things changed.

“He just went off to college and something happened to him in college. When he came back, he wasn’t the same,” she remarked.

Another shooting
Williams’ death came just days after Palm Beach County Deputy Evan Rosenthal shot Matthew Pollow, 28, to death on April 2. A report stated that Pollow was shot outside of his mother’s apartment in West Boca after he lunged at a deputy with a screwdriver in his hand.

In the report, Pollow’s family members said he had mental issues and had previous run-ins with the law. Family members have called Pollow, who graduated from Florida Atlantic University, “a nonviolent person.”

Records show he checked himself into a mental health center in 2008 and told officers that he had been diagnosed with schizophrenia and bipolar disorder.

Community meetings
Around the time of these tragedies, mental health experts in Palm Beach County had been strategizing with law enforcement and community groups on “breaking the connection between mental illness and the legal system.’’

Led by Mental Health America of Palm Beach County and its community partners, 400 students, teachers, parents, professionals, providers, first responders, faith advisors, leaders and advocates came together from January to April to share their stories and seek solutions. Seven sessions were held throughout the county.

The sessions followed President Obama’s call in 2013 for a national dialogue on mental health. In response, the Substance Abuse and Mental Health Services Administration (SAMHSA) launched a Community Conversations program.

#OK2Talk
The goals of the campaign, titled #OK2Talk, were to initiate dialogue, to identify the needs of youth struggling with mental illness in Palm Beach, to develop solutions to support such youth and prevent interaction with the criminal justice system, and to spread awareness and reduce the stigma of mental illness.

“What happens in my view is if we don’t catch the illnesses earlier, they are allowed to get worse…until they become a crisis,” she told the Florida Courier. “We’re putting most of our dollars into crisis services.’’

Gionfriddo said services need to start on the front end, noting that the average age when people begin to experience mental health issues is 14 years old.

Available solutions
Recommendations that came out of the community talks included:

Encouraging more training and guidelines for all first responders that include early mental illness recognition and de-escalation strategies;

Developing a separate program to evaluate individuals who might be considered for an arrest but could benefit from a mental health evaluation prior to transport to jail or a hospital emergency room;

More than 900 of Palm Beach County’s 2,400 law enforcement and corrections deputies have taken Crisis Intervention Training (CIT), which teaches officers how to handle people with mental illness or a substance use. The 40-hour training, which began in Memphis, Tenn. in the 1980s, is called an effective police response program designed for first responders who handle crisis calls involving people with mental illness, including those with co-occurring substance use disorders.

According to a report released after the #OK2Talk community conversations, many participants said CIT is not enough, stating they “had been arrested, treated roughly, not provided with appropriate care or medications while in jail, and then released with no transition plan.’’

No help
Tinoris Williams’ mother has stated that she tried to get proper care for her son and had tried on occasions to have a judge order mental health treatment but Tinoris wouldn’t show up for the court date.

“I don’t care what he did in the past,” she stated the day after he died. “I don’t care if he was found guilty on any of them charges. If he had a felony, it still doesn’t justify what was done yesterday.’’