The New Atlanta Stadium and the 31 Percent
Advertisement 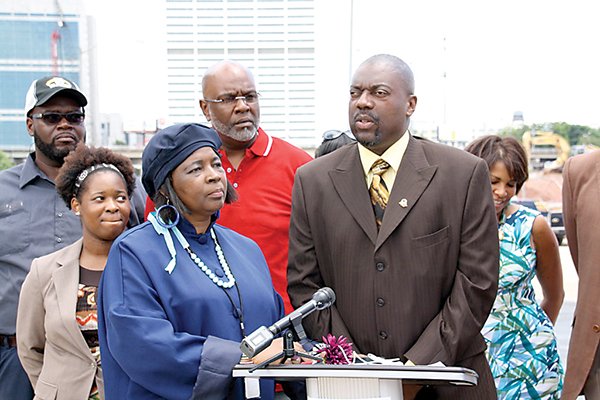 by Stan Washington
Special to the NNPA from The Atlanta Voice

Representatives from a minority business association say they are concerned that minority participation in the building of the new Atlanta stadium may not reach the required 31 percent goal that is outlined in the Equal Business Opportunity Plan.

The Georgia Black Constructors Association expressed their concerns Monday June 2 on the sidewalk outside of the construction site for the new stadium. The association has been attempting to meet with the Arthur Blank Foundation, Atlanta Falcons President Rick McKay and Bill Darden, project manager for the new stadium.

“The Foundation has shown no clear transparency as to how or where the 30% minority participation will occur,” said GBCA President Margaret Muhammad.  “And to-date, we have not received a response on the purposed meeting date with Darden, the project manager for the Atlanta Falcons.”

The Equal Business Opportunity Program for the $1.2 billion stadium set to open in 2017 calls for roughly $300 million to go to small, minority and female businesses in the construction and design of the retractable roof stadium which will replace the Georgia Dome.

When the plan was approved in 2013 by the board of the Georgia World Congress Center, McKay applauded the plan as big plus for female and minority businesses.

“The EBO Plan …lays out a thorough and transparent process for encouraging and engaging qualified minority and female businesses in the new stadium project,” McKay said. “This plan provides a roadmap for us, as well as our architects and general contractors, to achieve our goals.”

But being a small minority or female business doesn’t automatically qualify a firm to work on the new stadium. The business must first be certified.

Darden told the GWCCA board that the EBO plan was being “patterned” after the city’s experience in building the new Maynard H. Jackson International Terminal at Hartsfield-Jackson International Airport. The city’s first African American mayor was responsible for creating a minority business set aside program for the city of Atlanta.

The GBCA also claims they obtained little or no information from a recent townhall meeting held by Atlanta City Council President Ceasar Mitchell for businesses about the new stadium. The meeting featured representatives from HHRM, the lead contractor on the project, the City’s Office of Contract Compliance and the Atlanta Falcons.

The lack of “specific detailed” information from that townhall concerns their membership said Muhammad.

In statement released following the townhall, Mitchell said that there would be several other townhall meetings for businesses looking to do business with the Atlanta Falcons and the in the building of the stadium.

For Some Retirees, a Second Act Is Easier Than Expected