‘The Fight for Freedom and Peace’
Advertisement 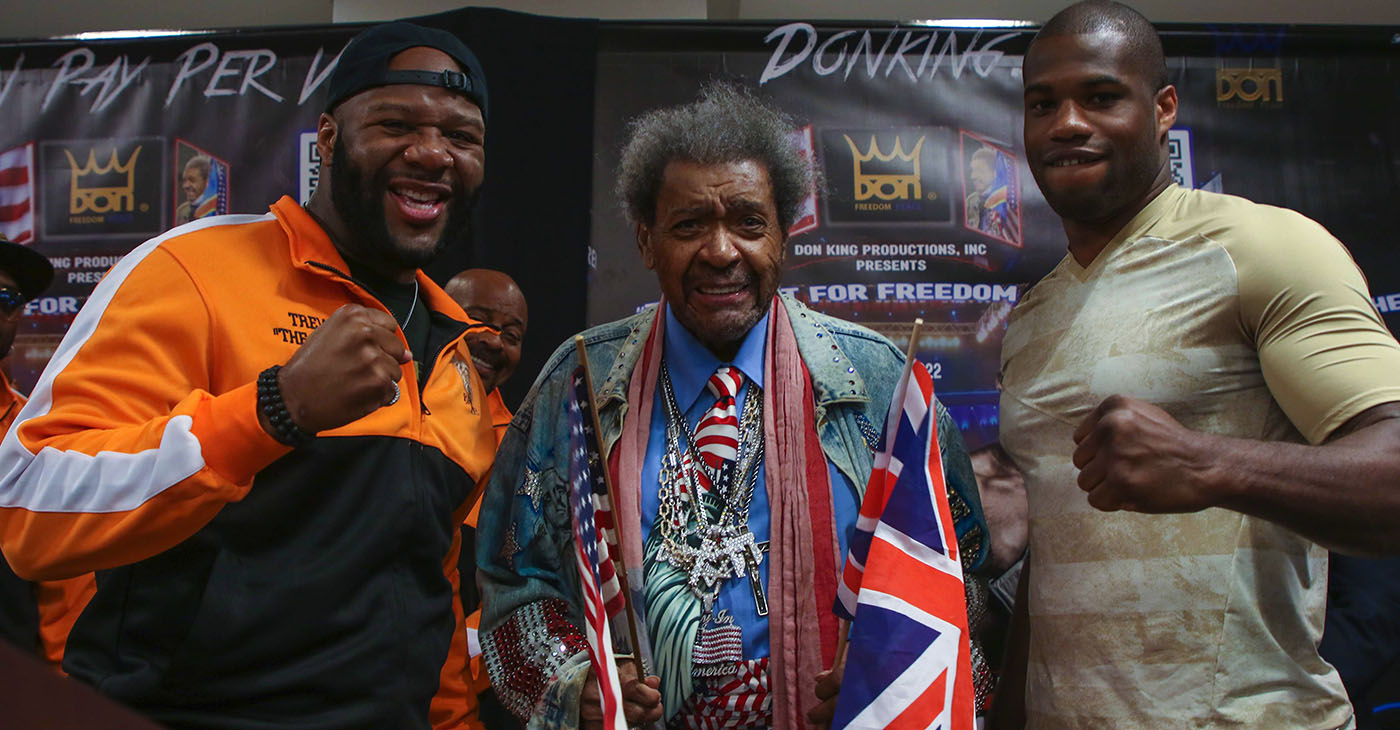 Legendary promoter Don King stands between heavyweight boxing titans Trevor Bryan and Daniel Dubois in Miami at the Embassy Suites during the final press conference for “The Fight for Freedom and Peace” on June 11, 2022 at the Miami Casino. (Don King Productions Photo)

MIAMI-FL — WBA Heavyweight Champion Trevor The ‘Dream’ Bryan (22-0,15 KOs) was the last to arrive at the final press conference for Don King’s ‘The Fight for Freedom and Peace’ at the Embassy Suites Hotel in Miami on Wednesday June 8th, but he hopes to be the last man standing when he takes on mandatory British challenger Daniel Dubois (17-1, 16 KOs) on Saturday June 11 at Miami Casino and streaming around the world on DONKING.com, FITE, ITube 24/7 and 11eleven.tv for $29.99.

“The Fight for Freedom and Peace” is dedicated to brave and courageous members of the Ukraine, people of the Ukraine that Russia has decided to invade and declare war because of a bruised ego. Because this really isn’t a war this is a family feud that has turned into a tragedy with homicidal effect,” opined promoter Don King. “Genocide and killing people every day, I just got a call from them last night and they said they again bombed Kyiv because the Klitschko brothers are there and were going to be here to gain further support for their cause for fighting for freedom, independence, peace, sovereignty and prosperity.”

King argued that Dubois and his team have already counted out the American Bryan as odds at major betting sites have opened with the challenger installed as a prohibitive 7-1 favorite to capture the WBA title.

“He’s already counted Trevor out, so we don’t have to worry about that part we can just pass him the belt and we don’t have to go through rigmarole. I don’t know if you are familiar with this Dubois, but Cornwallis was the general (British Gen. Charles Cornwallis) and he was really attacking and knowing down trees and stuff and jumping on George Washington, but when Washington got through Cornwallis surrendered,” said King giving the young fighter a brief history lesson. “They have absolutely counted America out, my country tis of thee, sweet land of liberty.”

Dubois introduced himself to America declaring; “I’m ready to rumble, I am out here to make myself, my family and my country proud. This is what I been waiting for and I can’t wait. I know I have to go through Trevor and I take that belt back home on the plane, so let’s go.”

“All throughout the world and nobody knows Trevor and Dubois says I’m destroying Trevor because he did everything that’s anti Dubois and I don’t like it and I am going to demonstrate that to him when I see him,” King quipped before introducing his champion.

“On this side over here is ‘The Dream’, the man has a dream and that’s what America’s all about is a dream. This young man is undefeated and his dream has been to be the world champion, but he was never considered like the guys such as Anthony Joshua, with Tyson Fury and Wilder all the guys that when the big payday would come didn’t consider him, but after this fight you didn’t know who he was before the fight but you damn sure will know who he is after,” boasted King.

Bryant pounced to the podium at the 40-minute confab, oozing confidence and looking as fit as he’s ever been.

“Let me just say a couple of quick things. This is Trevor Bryan, you guys don’t know who Trevor Bryan is? Who I am is WBA heavyweight champion and I’m here to stay. Hello, hello everybody and listen this who I am. You see this face right here, I’m the WBA champion and I am going to be here for a long time” emphatically stated Bryan, lifting his sun glasses from his face, “Again, this fight is called Freedom and Peace, before you have Freedom and Peace you gotta have war and that’s what we gonna have, the guy think that I’m nobody and I’m here for nothing. I’m just 22-0 and I’m nobody and you are going to walk through me right? Not’s not what’s gonna happen, I’m telling you that right now. I hope that you are ready because I’m telling you it’s going to be a hard night for you. I’m Trevor Bryan, The Dream and I am going to be this guy nightmare June 11.”