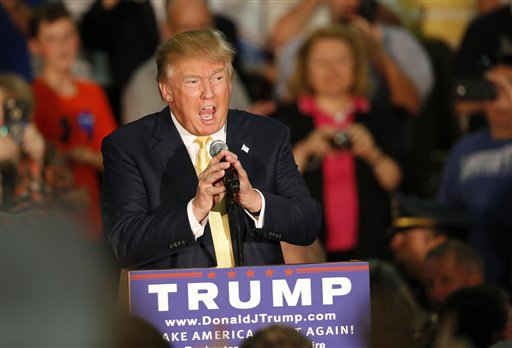 (Slate) – Donald Trump’s on-again, off-again feud with Fox News is back on. Given the results of their previous spats, which garnered lots of attention for all involved, this shouldn’t be a surprise.

.@FoxNews has been treating me very unfairly & I have therefore decided that I won't be doing any more Fox shows for the foreseeable future.

That tweet was the culmination of a multi-day Twitter fit that included complaints about Bill O’Reilly, Megyn Kelly, and what Trump claims was the network’s decision to ignore a recent Zogby poll that suggested the current GOP front-runner’s lead on his rivals actually grew in the wake of the second Republican debate, at which he wasn’t his usual Trumpian self. (His two-point gain in that poll was well within the survey’s margin of error; the Donald does not concern himself with such details.)

The official company line from Fox News, meanwhile, is that Trump decided to boycott the channel only after the network told him it had canceled his upcoming appearance on The O’Reilly Factor that had been scheduled for Thursday night. “The press predictably jumped to cover the tweet, creating yet another distraction from any real issues that Mr. Trump might be questioned about,” Fox News told the Huffington Post in a statement. “When coverage doesn’t go his way, he engages in personal attacks on our anchors and hosts, which has grown stale and tiresome. He doesn’t seem to grasp that candidates telling journalists what to ask is not how the media works in this country.”

Ben Carson: ‘Democrats Tend to Look More at the Color of Their Skin’