The Center for Civil and Human Rights: A Place To Remember and To Inspire
Advertisement 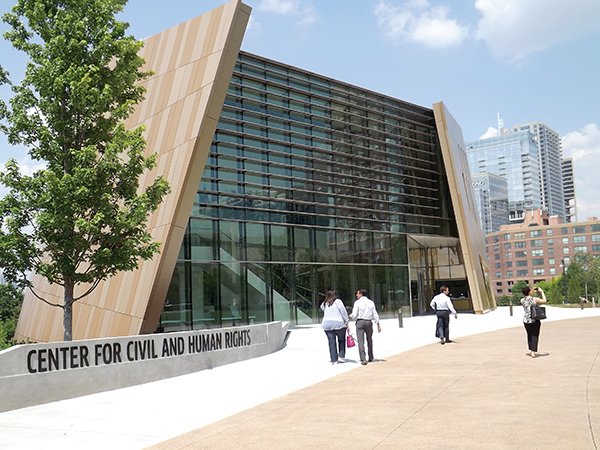 By Stan Washington
Special to the NNPA from The Atlanta Voice

On the top floor is the section focusing on the struggle for human rights across the world. (SW/AV)

The newly opened Center for Civil and Human Rights in Atlanta is far more than a place to commemorate or to learn about the accomplishments of the civil rights movement. It is a place that connects the past struggles for freedom to the current struggles for human rights and to light the spark for future movements against injustice.

“The Center uniquely and boldly connects historic freedom movements and iconic individuals, as well as everyday people, with the human rights issues of the present, thus sparking ongoing dialogue around the possibilities of the future,” said Doug Shipman, CEO of The Center during a preview of the Center before its public opening.

The 42,000-square foot museum devotes separate galleries to modern human rights issues and the U.S. civil rights movement of the 1950s and ’60s, but also demonstrates how the struggles are related. Visitors learn through interactive exhibits and stories of real people.

Permanent exhibits include a timeline about the civil rights movement and Rev. Martin Luther King Jr’s personal papers, but the museum also has a changing series of displays about ongoing struggles worldwide. The museum sits at one end of Centennial Olympic Park in downtown Atlanta, between the Georgia Aquarium and World of Coca-Cola.

King’s daughter Bernice shares in the vision and mission of the center.

“I think it’s important that those of us who have knowledge of the civil rights movement, that we continue to connect the dots for the next generation, that we not only share the stories of history but try to relate some of what happened in the ’50s and ’60s to the now,’’ said King who is also CEO of The King Center.

More important than just exhibits, the Center will also have persons who actually participate in the Civil Rights movement there to talk to visitors and groups about their experiences. Many of those who are still alive live in the Atlanta area.

On one exhibit which features a shell of a bus plastered with the arrest photos of the Freedom Riders, you see a young Hank Thomas, a successful business owner in Atlanta and a young John Lewis, the senior congressman from Georgia.

The shell also doubles as a theater showing a film about the riders; and exhibits about those who died in the struggle as well as Atlanta’s role in the movement.

Lewis was emotionally moved while touring the center. He express how proud he is of the city that he represents.

One particularly emotional exhibit looks at the civil rights movement’s lunch-counter protests, in which black students staged sit-ins, demanding to be served food alongside whites. When visitors don headphones and place their hands on a lunch counter, they hear increasingly intense taunts and threats endured by protesters.