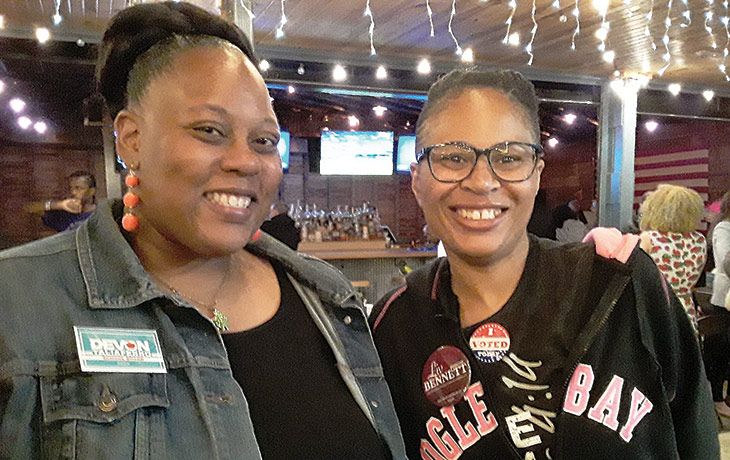 DEVON TALIAFERRO AND OLIVIA BENNETT won their bids for PPS school board and Allegheny County Council, respectively, during the May 21 primary election. Taliaferro and Bennett are North Side residents. (Photo by Rob Taylor Jr.)

Magic is defined as “the power of apparently influencing the course of events by using mysterious or supernatural forces.”

But in Pittsburgh, Devon Taliaferro and Olivia Bennett aren’t “mysterious or supernatural forces.” They are Black women, born and raised in this area, who sought to make change—in Taliaferro’s case, the school system, or in Bennett’s case, the justice system.

There is a popular hashtag/trending topic circulating across America, labeled #Blackgirlmagic. The concept was formed in 2013 “to celebrate the beauty, power and resilience of Black women.”

You can add Taliaferro and Bennett to Pittsburgh’s growing list of #Blackgirlmagic, after they won their primary election races on May 21.

Taliaferro, 38, dominated the Pittsburgh Public Schools Board District 2 race, besting three other contenders with 34 percent of the total vote. Bennett, 40, surprised many with a victory over challenger Denise Ranalli Russell for Allegheny County Council District 13. Bennett had 58 percent of the vote, Russell tallied 41 percent.

In this heavily Democratic area, both Taliaferro and Bennett won’t have any problems winning the November general election. Thus, you can make their positions on the board and council, respectively, a formality.

Added Taliaferro: “Black women are taking over, the Black girl magic is real, and I think it’s important because Black women have so much power and we have a great voice.”

In the May 21 primary election for state Superior Court, Amanda Green-Hawkins garnered the most votes of any candidate—Democrat or Republican—and is in the running to win one of two vacant seats on the court in the November general election.

“I think it’s underrated (the power of Black women),” Taliaferro told the Courier moments after her victory. “We work hard…we deserve to be acknowledged for that hard work. I think it feels good when people can say, ‘I believe in you,’ ‘I think that you can do it,’ and that’s what I’ve experienced.”

Taliaferro grew up in Wilkinsburg, graduated from Wilkinsburg High School in 1999, then attended Indiana University of Pennsylvania and the University of Pittsburgh. The East Allegheny resident currently is a program associate with Big Brothers Big Sisters of Greater Pittsburgh. She runs two mentoring programs—one at Brashear High School, the other at Greenfield Elementary. With her being in the schools, Taliaferro’s decision for running for school board was “solely on the experiences that I’ve had and the conversations that I’ve had with my students. I talk to kids all the time, I hear that they don’t like lunch, I see them get suspended for outrageous reasons. I see the issues and I see the needs that they have and they deserve better,” she said.

Taliaferro has two main priorities as a soon-to-be board member—first, “making sure our kids are staying in the classroom, that we’re really working towards the solutions that need to happen in order for us to eliminate suspensions…and invest more into the restorative justice practices that exist in the district. And second, investing in more PPS-designated “community schools.” Taliaferro wants to increase the resources that students need to be successful in the home and classroom. But what are those resources? Taliaferro said that is best answered by the parents. Thus, he wants to “engage (parents) and meet them where they are,” such as their child’s football game.

As for Bennett, she couldn’t believe what happened to Antwon Rose II. “When we witnessed a young boy getting shot in the back three times, running away from an officer…we can’t blame a young boy,” she told the Courier after her victory. “This officer was out to serve and protect…I don’t think shooting a boy in the back three times is serving or protecting. We have over 100 police departments in Allegheny County. They are not all working on the same standards and protocols. We need to fix that.”

Rose, 17, was shot to death by former East Pittsburgh Police Officer Michael Rosfeld in June 2018, and was found not guilty of criminal homicide by a jury in March.

Bennett’s primary focus as a future member of county council is the implementation of a county-wide citizen police review board. “Just because you cross over into another municipality, which can happen just by crossing the street in some places,” Bennett said that doesn’t mean a police department’s policies should change.

“We need to have a clear definition on how we are policed in our communities and that is what that county citizen police review board (is for),” Bennett said.

Bennett is a 1996 graduate of Oakland Catholic High School, and earned a bachelor’s degree in business from Carlow University. She’s about to attend the University of Pittsburgh’s Graduate School of Public and International Affairs.

Bennett, a Northview Heights resident, celebrated with family, friends and the Taliaferro contingent at Walter’s BBQ Southern Kitchen in Lawrenceville, after learning of the election results.

The mood was festive, as one would expect. The hugs for Bennett and Taliaferro were aplenty, the outpouring of support was abundant.

Absent from the celebration were David Copperfield and David Blaine, two of America’s most famous magicians.

No problem. Taliaferro and Bennett brought their own magic—#Blackgirlmagic.

“We’re tired of people speaking for us that don’t look like us, that don’t live our experiences, but want to continue making policy that is harming us,” Bennett told the Courier. “I think that people around the county are fed up with this, and you see that today.”

This article originally appeared in the New Pittsburgh Courier.