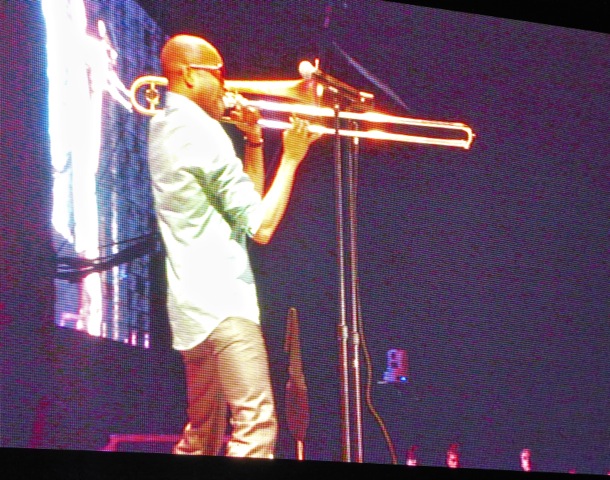 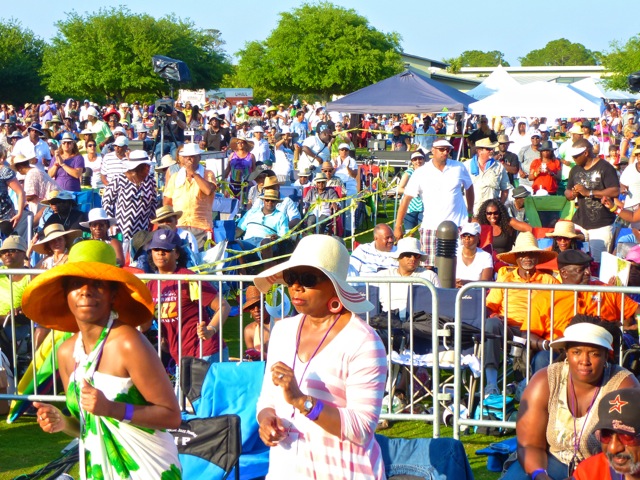 The annual Seabreeze Jazz Festival is a major stop on the jazz festival circuit. The four-day weekend soiree draws a burgeoning audience of 20,000 music lovers from Florida, Georgia, Alabama—41 states in all and ten countries. They come to Panama City Beach to hear international musicians sing and play their instruments in a style that is largely smooth jazz. Though over the recent weekend fest, pop, rock, funk, hip-hop, classic R&B and soul lived under that umbrella too. The heart of the festival took place at the Pier Park Amphitheater. The joy of the trip took place all over Panama City Beach.

Count on a New Orleans Legend to Kick Things Off

Thursday, April 24th, vocalist and saxophonist Michael J. Thomas, who hails from Destin, FL—a hop-skip-and a jump from PCB—inaugurated the festival. He was followed by the R & B, blues and funk flavors of jazz guitarist Nick Colionne who also has deep baritone voice.

Those artists warmed the audience up for the headliner, Trombone Shorty & Orleans Avenue. Trombone Shorty, aka Troy Andrews, calls New Orleans home and he brings a funk/pop/hip-hop flavor of the Big Easy with him when he blasts his funkadelic trombone and stomps around the stage. He funkified a version of Lenny Kravitz’s “American Woman” backed by a mean electric guitar and tenor sax. Then he slowed things down and asked the crowd, “Can I play a little blues on my trombone for you? Can I take you down to Treme, New Orleans?” Then he launched into a Ray Charles classic, singing “I got a woman way over town. She’s good to me.”  Gyrating, prancing, dancing and getting the audience clapping and swaying he worked the crowd like an evangelist. If Chaka khan and James Brown had a child, Trombone Shorty would be him.

It Only Got Better

Jones & Company opened the second night.  Followed by Eric Darius; he calls Tampa home and blends jazz, R&B, hip-hop and pop when he wails on his saxophone. He ended his set with a spirited version of Pharrell Williams’ hit song “Happy” and left the crowd on a joyous note. The main act was supposed to be a super group of smooth jazz musicians: guitarists/singers Jonathan Butler and Norman Brown and keyboardist Alex Bugnon. Butler announced that Brown was absent because his sister had just passed away. Butler dedicated his first song, the James Taylor classic “Fire and Rain” to Brown and his family. He and Bugnon played mellow jazz, which soothed the audience. Bugnon caught his grove on his old silky, foxy hit “107 Degrees in the Shade.” Butler announced a new album release in June and sang a lively uplifting song from it called “I’m Living My Dream.”

The Saturday concert series started at 11am, with folks gathered around sipping beer and margaritas as they munched on concessions food (from fried whiting to smoked ribs). At 4pm Brian Culbertson and his band of superb artists had the crowd dancing on their feet, shaking their collective booty. His organist crooned the very sexy Quincy Jones classic “Secret Garden” and Culbertson, very tongue in cheek, chose the rousing 1970s #1 hit “Play That Funky Music” as his last song as he and his band members jumped around stage causing pure pandemonium.

The crowd had quieted down by the time R&B singer Will Downing and his band took the stage. Downing promoted his new album Euphoria, did a version of Marvin Gaye’s “Sure Love to Ball,” and took the audience into a love zone.  He wooed the women, coached the men on how to please them and soulfully sang the very suggestive song “A Million Ways to Please a Woman.” Downing’s voice still hits very rich bass notes, but he had to use his upper register when he invited falsetto-loving Phil Perry on stage to duet on “Send For Me.” The two talked about love, relationships and cheating: Downing, “Phil lots of couples think the grass is greener on the other side.” Perry, “The grass is greener at home if you water it.” The crowded laughed and roared. Then the two traded verses and showed off their vocal chops. Downing ended the evening with graphic details on how a man can satisfy a woman.  He’s this generation’s Teddy Pendergrass, a Love Emperor.

The final night of the festival peaked with The Seabreeze Smooth Jazz All Stars: Brian Simpson, Kim Waters, Maysa and another appearance by scene-stealing Phil Perry. It was a night to remember.

Panama City Beach is nestled on the northwest coast of Florida, on the Gulf of Mexico. Families, spring breakers, bikers, music lovers and especially beach lovers flock to the fine-grain, white sand beaches made of quartz crystals. Quartz makes the sand soft and absorbs heat, so the bottoms of your feet never feel the sun’s hot rays.  Most of the vacation accommodations that line the nine-mile shoreline are condominiums (http://www.wyndhamvacationrentals.com/), versus chain hotels. Vacation here and you’ll likely get a kitchen and bedroom too.

St. Andrews State Park (http://www.floridastateparks.org/standrews/): This former military reservation features two fishing piers, two nature trails and “Gator Lake.”  Most people come to the park to enjoy the one-and-a-half mile beach that’s perfect for kayaking, snorkeling and night diving. Or they camp out or to take the ten-minute ferry ride to the desolate Shell Island to spend the day on the picturesque 7-1/2 mile long barrier isle that sits at the mouth of St. Andrew’s Bay.

Family Fun: Gulf World Marine Park (http://www.gulfworldmarinepark.com) features daily shows with Dolphins and Sea Lions, shark and turtle feedings and magic shows. Many of the animals are rescued, rehabbed and not believed to be releasable to the wild.  They call Gulf World home.

Breakfast: The great debate is who has the better French toast, Andy’s Flour Power Café and Bakery or Liza’s Kitchen. Lunch: Finn’s Island Style Grub is famous for its Fish Tacos (Two corn tortillas loaded with grilled or blackened fish). Zen Garden Market & Lotus Café is set among a Buddhist style garden and their delectable Fish Sandwich is made with soy-ginger glazed salmon on a thin bun with wasabi mayo, lettuce and cucumbers. Dinner: Schooners bills itself as “The Last Local Beach Club;” you can people-watch on their beach, hear local musicians in their main room or dine on their very tasty Fried Gulf Fresh Grouper. Firefly is possibly PCB’s most elegant high-end restaurant. Classic American furniture adorns the lobby; waiters in white shirts and black aprons serve delicious Jumbo Lump Crab Cakes for appetizers and Apple-Wood Bacon Wrapped Shrimp or 16-Ounce Certified Angus Bone-in Rib Eye Filet for entrees.

During the annual Seabreeze Jazz Festival (http://www.seabreezejazzfestival.com), Panama City Beach (http://www.visitpanamacitybeach.com) hits a high note when it’s filled with thousands of music lovers. The rest of the year, the sugar-sand beaches attract beach lovers of all persuasions.