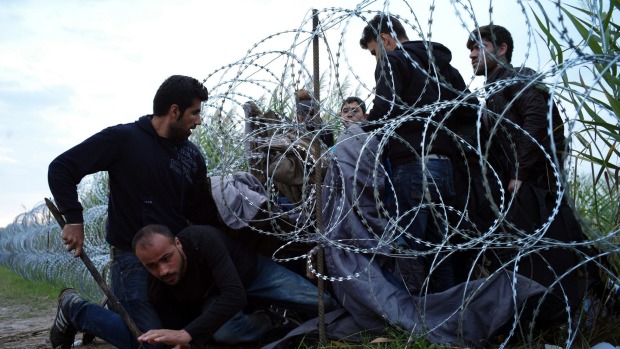 Syrian refugees fleeing their country to escape war and poverty. Until the war ends the flood of refugees will just keep coming. (AP Photo)

(Sydney Morning Herald) – In the last week, heart-wrenching photographs of dead children on Europe’s shores have re-ignited calls for wealthy western states to reform their refugee policies and re-settle more people fleeing the wars in the Middle East. As a result, Tony Abbott announced on Wednesday that Australia will accept an extra 12,000 refugees from Syria. While increasing refugee intake is important, it will not solve the crisis, which is not about refugee policy, but about the need to end one of the worst civil wars of our time.

There are currently two wars raging in Syria. The first is a civil war between the Assad regime and the Syrian opposition over the way the Syrian state is governed.

The second is broader and we hear more about it – it is the war waged by Islamic State to establish a Caliphate across the region. Too often, these two wars have been conflated, and the former has been complicated and obscured by the grotesque and show-stopping horrors of the latter.

The Syrian civil war began when non-violent protests against the Assad government were met with brutality in March 2011. Since then, 12 million people have been affected, which is more than the Indian Ocean Tsunami, Hurricane Katrina and Haiti earthquake combined. Half of Syria’s population has been displaced: 4 million to neighbouring countries, and nearly 8 million within Syria. The war has killed more than 250,000 people, nearly a third of which were civilians. It is the worst humanitarian crisis of our time, and it shows no sign of abating.