Stars of 'Real Housewives' Get Prison for Fraud
Advertisement 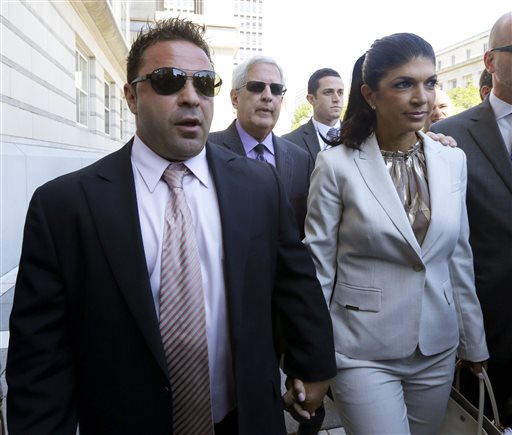 In this July 30, 2013 file photo, “The Real Housewives of New Jersey” stars Giuseppe “Joe” Giudice, 43, left, and his wife, Teresa Giudice, 41, of Montville Township, N.J., walk out of Martin Luther King, Jr. Courthouse after an appearance in Newark, N.J. Teresa and Giuseppe “Joe” Giudice are scheduled to be sentenced Thursday Oct. 2, 2014 on conspiracy and bankruptcy fraud charges in federal court in Newark. (AP Photo/Julio Cortez, File)

NEWARK, N.J. (AP) – The married stars of the “Real Housewives of New Jersey” are trading the drama of reality TV for prison.

Teresa Giudice was sentenced Thursday in U.S. District Court to 15 months in prison on conspiracy and bankruptcy fraud charges while her husband, Giuseppe “Joe” Giudice, was sentenced to 41 months by a judge who castigated them for failing to disclose all their assets yet gave both a measure of leniency.

In a nod to the couple’s four young daughters, Judge Esther Salas staggered the sentences so that Teresa Giudice will serve her sentence first. Teresa Giudice is scheduled to report to prison in early January.

Teresa Giudice, 42, cried as she apologized in court before her sentencing.

Joe Giudice also apologized and said he had disgraced many people. He faces an immigration hearing when he completes his sentence and likely will be deported. His attorney has said Giudice came to the U.S. as an infant and didn’t know he wasn’t an American citizen until he was an adult.

A spokeswoman for NBCUniversal, which owns Bravo, the channel that airs “Real Housewives,” said Thursday that the network wasn’t commenting on the Giudices’ position with the show.

The network said the couple will appear together on “Watch What Happens Live” on Monday night for their first postsentencing interview.

Thursday’s sentencing drew a mob of media, with an overflow courtroom to accommodate spectators. At several junctures, the judge criticized the couple for omitting numerous assets from a presentencing report, including ATVs and other vehicles and jewelry.

During Teresa Giudice’s sentencing, Salas said she had even considered giving her probation combined with home confinement and community service but changed her mind because of the omissions.

“You are a savvy businesswoman. You know how to brand yourself,” she said. “You tell me you didn’t understand you had to cooperate? It defies logic.”

Assistant U.S. Attorney Jonathan Romankow called the omissions “the same pattern of obstruction, concealment and manipulation as they showed in the bankruptcy case.”

The couple had pleaded guilty in March, admitting they hid assets from bankruptcy creditors and submitted phony loan applications to get some $5 million in mortgages and construction loans. Joe Giudice also pleaded guilty to failing to pay taxes totaling more than $200,000.

Despite the admonitions, the judge gave Teresa Giudice a sentence below the agreed-upon range in her plea agreement, 21 to 27 months. She cited “significant mitigating circumstances” including the Giudices’ four daughters, Teresa Giudice’s aging parents and the fact that she had a lesser role in the conspiracy than her husband.

The judge sentenced Joe Giudice in the middle of the sentencing range contained in his plea agreement, 37 to 46 months. She chastised him for not being forthcoming about the couple’s assets but noted his “giving heart” for charitable works such as rebuilding a woman’s home for free after Tropical Storm Irene and helping numerous others after Superstorm Sandy.

U.S. Attorney Paul Fishman said that he was satisfied with the sentences and that the Giudices’ celebrity status didn’t sway the investigation in any direction.

“We prosecute a lot of white-collar crime,” he said. “The fact that she’s a celebrity played no role in what her punishment was. But we do believe that when people like Teresa Giudice and Giuseppe Giudice are investigated, prosecuted and sentenced for these types of crimes that it does send a message to everyone who’s watching.”

Steve Martin: A Wild and Crazy and Honored Guy