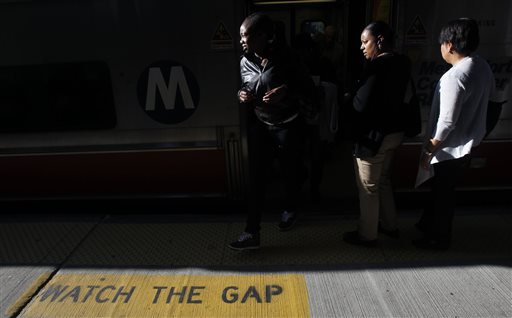 In this file photo taken Wednesday, Sept. 29, 2010, commuters exit and board a train bound for New York during the morning rush hour in Mt. Vernon, N.Y. Economists have long argued that rising economic inequality has held back the U.S. rebound from the Great Recession. (AP Photo/Seth Wenig, File)

WASHINGTON (AP) — Economists have long argued that a rising wealth gap has complicated the U.S. rebound from the Great Recession.

Now, an analysis by the rating agency Standard & Poor’s lends its weight to the argument: The widening gap between the wealthiest Americans and everyone else has made the economy more prone to boom-bust cycles and slowed the 5-year-old recovery from the recession.

Economic disparities appear to be reaching extremes that “need to be watched because they’re damaging to growth,” said Beth Ann Bovino, chief U.S. economist at S&P.

The rising concentration of income among the top 1 percent of earners has contributed to S&P’s cutting its growth estimates for the economy. In part because of the disparity, it estimates that the economy will grow at a 2.5 percent annual pace in the next decade, down from a forecast five years ago of a 2.8 percent rate.

The S&P report advises against using the tax code to try to narrow the gap. Instead, it suggests that greater access to education would help ease wealth disparities.

Part of the problem is that educational achievement has stalled in recent decades. More schooling usually translates into higher wages. S&P estimates that the U.S. economy would grow annually by an additional half a percentage point —or $105 billion — over the next five years, if the average the American worker had completed just one more year of school.

By contrast, S&P concludes, heavy taxes that would be meant to reduce inequality could remove incentives for people to work and cause businesses to hire fewer employees because of the costs involved.

The report builds on data from the Congressional Budget Office, the International Monetary Fund and academic economists to explain how income disparities can hurt growth. Many consumers tend to become more dependent on debt to continue spending, thereby worsening the boom-bust cycle. Or they curb their spending, and growth improves only modestly, as it has during the current recovery.

Tax data tracked as part of the World Top Incomes Database project reveal just how much the economic chasm has expanded.

An American in the top 1 percent of earners had an average income of $1.3 million in 2012, the most recent year for which data are available. Average income jumps to $30.8 million for the top 0.01 percent.

Adjusted for inflation, the top 0.01 percent’s average earnings have jumped by a factor of seven since 1913. For the bottom 90 percent of Americans, average incomes after inflation have grown by a factor of just three since 1917 and have declined for the past 13 years.

Yet not all economists agree on how much, or even whether, the wealth gap slows growth.

Harvard University economist Greg Mankiw wrote in a 2013 paper that “the evidence is that most of the very wealthy get that way by making substantial economic contributions, not by gaming the system.”

But S&P challenges the notion that a rising tide automatically will lift all boats:

“A lifeboat carrying a few, surrounded by many treading water, risks capsizing,” it argues.