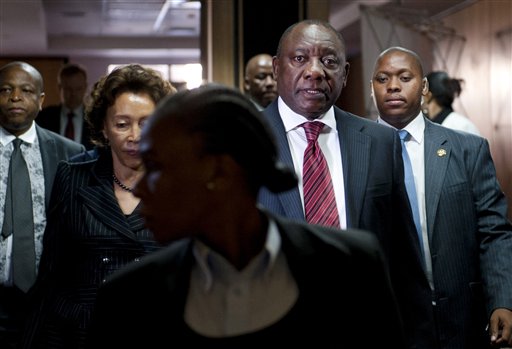 This photo taken Monday, Aug. 11 2014 shows newly elected deputy president Cyril Ramaphosa arrives at the Marikana commission of inquiry in Centurion, South Africa. Ramaphosa, a former union leader and businessman testified Monday and Tuesday Aug. 12, 12 2014, before a panel that is investigating the killings of several dozen people who were killed during labor unrest at platinum mine operations in Marikana in 2012. (AP Photo)

JOHANNESBURG (AP) — Hecklers on Tuesday accused South African Deputy President Cyril Ramaphosa of being a murderer for the police killings of several dozen people during labor unrest at platinum mine operations in 2012.

Ramaphosa, a former union leader and businessman who became deputy president this year, expressed regret for the killings near a Lonmin mine, but denied any wrongdoing. At the time of the 2012 violence, Ramaphosa had a prominent role in the ruling African National Congress party and was a director and shareholder of the Lonmin mining company. He testified Tuesday before a judicial panel that is investigating the 2012 killings.

Ramaphosa, a union leader during apartheid, became deputy president in May after the ANC was returned to power in elections. Ramaphosa is widely viewed as the favored candidate to succeed South African President Jacob Zuma, who was re-elected this year.

Ramaphosa should be charged with murder because of allegations that he appealed to police to crack down on striking miners, said Dali Mpofu, a lawyer for some of the miners involved in the protests, while questioning the politician before the panel.

“I deeply regret the deaths of all the people who died at Marikana,” Ramaphosa said. Responding to the murder allegation, he said: “I do not agree with the proposition that the learned advocate has put forward.”

During Ramaphosa’s remarks, several protesters shouted that he was a murderer and a capitalist pawn before they were ushered out of the chamber.