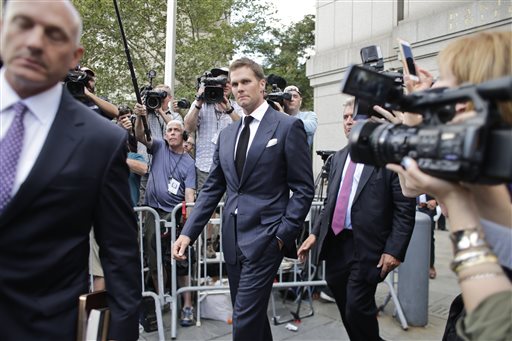 New England Patriots quarterback Tom Brady leaves federal court Wednesday, Aug. 12, 2015, in New York. Brady left the courthouse after a full day of talks with a federal judge in his dispute with the NFL over a four-game suspension. (AP Photo/Frank Franklin II)

NEW YORK (AP) — For a second day Thursday, lawyers for the NFL and its players’ union met separately with a federal judge to try to resolve their legal dispute over whether Commissioner Roger Goodell’s four-game suspension of New England Patriots quarterback Tom Brady should stand.

Two hours of morning meetings occurred a day after Judge Richard M. Berman in Manhattan oversaw more than four hours of discussions aimed at moving both sides toward a settlement of a dispute over deflated footballs that threatens to taint next month’s start of a new season.

Neither Brady nor Goodell attended Thursday’s talks. The judge instructed both sides that Brady and Goodell are not required to attend a scheduled court hearing next Wednesday.

Last month, Goodell upheld Brady’s suspension, concluding he “knew about, approved of, consented to, and provided inducements and rewards” to support a scheme in which a Patriots employee deflated balls before the Patriots beat the Indianapolis Colts 45-7 in the Jan. 18 AFC championship game. The Patriots went on to win the Super Bowl.

Brady has repeatedly said he knew nothing about a plot to deflate game balls. The players’ union, fighting the suspension, maintains there is no proof balls were deflated.

There are no additional talks with the judge scheduled before next week’s hearing, though lawyers were expected to continue negotiations on their own.

The latest talks occurred because lawyers had not finished their meetings with Berman when they left the courthouse Wednesday after four hours of discussions.

If there is no settlement, Berman will decide whether Brady’s suspension remains in place at the start of the season.

Asked about the talks, union attorney Jeffrey L. Kessler said Thursday: “Sorry, not commenting.” An NFL lawyer did not immediately respond to a request for comment.

During a public court session Wednesday, the judge softened each side for negotiations by pointing out weaknesses in their arguments.

He narrowed the case facts to January’s championship game and pressed the NFL to cite direct evidence that Brady knew balls were deflated. He asked a union lawyer to explain how balls could be deflated without Brady’s knowledge and why Brady would destroy a cellphone that contained nearly 10,000 text messages, some of them presumably relevant.