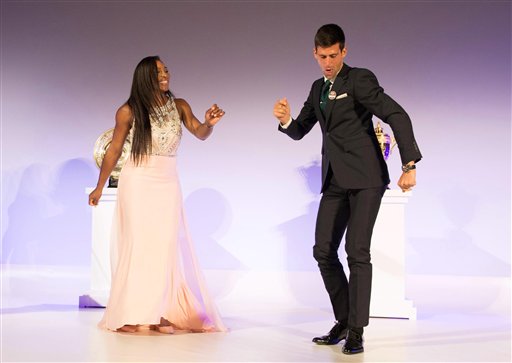 Wimbledon Champions Novak Djokovic of Serbia, right, and Serena Williams of the US, dance on stage at the Wimbledon Champion dinner, at the Guildhall, London, Sunday, July 12, 2015. (Thomas Lovelock, Pool Photo via AP)

LONDON (USA Today) — Resuming a tradition that had been dormant for decades, Novak Djokovic and Serena Williams hit the dance floor at the Wimbledon Champions’ Ball on Sunday night after their respective championship weekends.

Serena was resplendent in a cream, jewel-encrusted dress, while Djokovic donned a perfectly-fitted black suit for the occasion. After defeating Roger Federer in four mostly riveting sets in Sunday’s final, the men’s champion said he was going to ask Serena to dance.

Apparently he did just that and received the affirmative from the 21-time Grand Slam champion.

Djokovic said he originally planned for a waltz, but they ended up performing something straight out of Saturday Night Fever instead.

Serena Williams and the Fear of a Dominant Black Woman