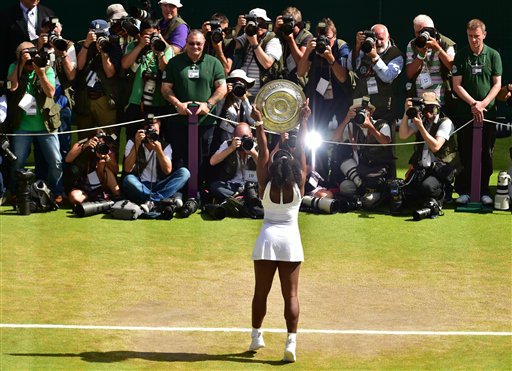 Serena Williams of the United States holds up the trophy toward the media after winning the women’s singles final against Garbine Muguruza of Spain at the All England Lawn Tennis Championships in Wimbledon, London, Saturday July 11, 2015. (Dominic Lipinski/Pool Photo via AP)

Williams said she felt pain in the elbow in the first game of her first-round match on Wednesday, four days after winning her sixth Wimbledon championship and fourth successive Grand Slam title, but went on to roll Belgian qualifier Yasline Bonaventure 6-2, 6-1.

“I was having some pain in my elbow, and I felt a little bit in my match,” she said in an interview with tournament organizers. “But this morning it really exploded (in practice) … I really couldn’t hit serves.”

Appearing downhearted, the 2013 Swedish Open champion said she wanted to do what was best for her body, and made the right decision, despite it being a “really, really difficult decision.”

Williams told spectators on court that she was sad to withdraw, and looked forward to playing again at Bastad.