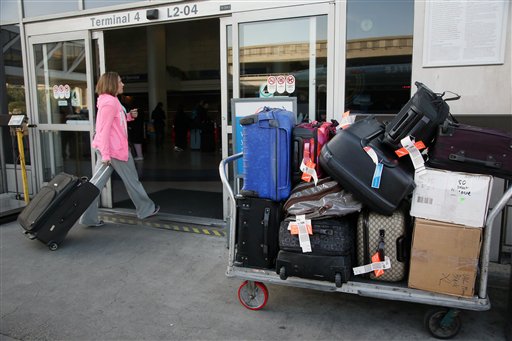 WASHINGTON (AP) — The government should crack down on airline fees for things like seat reservations, checked baggage and ticket changes or cancellations, which are often unfair or hidden from consumers, according to a Senate report released Thursday.

The report, which is based on an investigation by the Democratic staff of the Senate commerce committee, says there appears to be no connection between the price of checked bag fees and the costs incurred by the airlines that impose them.

“For example, many airlines charge a fee for a second checked bag that is substantially higher than the fee for the first checked bag, even though there appears to be no cost justification other than increased profit for doing so,” the report said. It recommends that the Department of Transportation, which has the power to investigate and prohibit “unfair or deceptive” practices in the airline industry, investigate whether bag fees should be tied to actual costs incurred by an airline.

The report also says that five airlines surveyed by committee staff — United, Delta, American, Hawaiian and Spirit — charge consumers a flat fee for changing or cancelling a ticket no matter how far in advance of a flight the changes are made. Further, it’s very hard for consumers to find information on airline websites on the cost of change and cancellation fees, the report said.

Citing an attempt to find the cost of the fees while booking a United Airlines flight last month, committee staff had to click on several pages before finding a vague explanation that change and cancellation fees can range “from $0 to $1,000 per person, based on applicable fare rules.” A link in small type to the rules for each segment of a flight from Washington to Orlando with a layover in Chicago spanned 54 printed pages of text.

Change fees should be limited to “a reasonable amount tied to lead time prior to departure and a maximum percentage of the original fare paid,” the report said.

Airlines are also increasingly using preferred seating as a new source of revenue, the report noted. When selecting seats, consumers are sometimes presented only with seats for which they must pay an additional fee. That was the case for a Delta flight from New York to Cincinnati that the committee booked, the report said.

“In these instances, consumers face confusion as to whether they are required to pay an additional fee for a seat, and do not realize that if they do not, they will still be assigned a free seat at a later time,” the report said. It recommends that airlines should have to provide clear disclosures that “preferred seat” charges are optional.

“The traveling public is being nickel-and-dimed to death,” said Sen. Bill Nelson, D-Fla., the Commerce, Science and Transportation Committee’s top Democrat. “What’s worse is that many flyers don’t learn about the actual cost of their travel until it’s too late.” Nelson said he intends to press his colleagues to act on the report’s recommendations when the Senate begins its work on legislation reauthorizing the Federal Aviation Administration later this year.

Jean Medina, a spokeswoman for Airlines for America, an airline industry trade association, rejected the criticisms.

“It would be difficult to find an industry that is more transparent than airlines in their pricing,” she said in an email. “The fact that a record number of people are traveling this summer further demonstrates that customers always know what they are buying before they purchase.”

Economy Adds 215,000 Jobs in July, but Not Enough to Dip Unemployment Rate