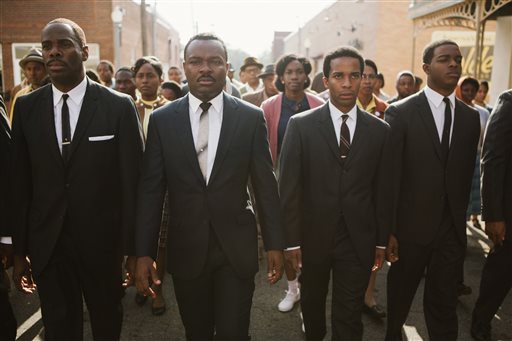 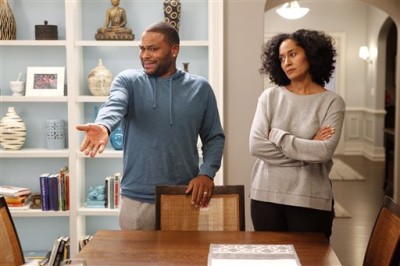 In this image released by ABS, Anthony Anderson, left, and Tracee Ellis Ross appear in a scene from “Black-ish.” (AP Photo/ABC, Kelsey McNeal)

LOS ANGELES (AP) — The civil rights drama “Selma” won top honors at the NAACP Image Awards in a ceremony that took sharp notice of snubs of African-American artists and their work by the Oscars.

“This is more than a movie,” Oprah Winfrey, who was a “Selma” producer and appeared in it, said Friday in accepting the trophy for outstanding motion picture. “It’s important that we all know who we are so we know where we’re going, and claiming the glory.”

“I want to take this opportunity to say I thank the Lord I was able to play one of the most transcendent human beings who ever walked the planet,” Oyelowo said.

Awards host Anthony Anderson, the “black-ish” star whose freshman ABC sitcom was a big TV winner Friday, opened the night with a jab at the Academy Awards, which this year has an all-white slate of acting nominees.

The critically acclaimed “Selma,” although a best-picture and best-song nominee at the Feb. 22 Oscars, failed to garner bids for Oyelowo or director Ava DuVernay. In January, it received a Golden Globe award for best song.

“People are up in arms because they feel the other award shows have snubbed us. So what. We’ve got our own show, right?” Anderson said. He then launched into a number that included the lyrics: “Writing, directing, no respect from this city,” and a refrain, “Forget the Oscars, hallelujah,” the Emmys and Golden Globes.

Taraji P. Henson was a double winner: she was named best actress in a movie for “No Good Deed” and entertainer of the year. Henson, star of the new Fox midseason hit “Empire, is enjoying an especially good 2015.

“To be able to do show about raising our black families every day is a blessing,” said “black-ish” creator and producer Kenya Barris.

Spike Lee received the NAACP President’s Award, which recognizes those who have combined career success and public service. In his speech, the filmmaker addressed the obstacles facing blacks.

“This stuff is rigged. It’s not set up for us to win. It’s always been like that. Since we were stolen from mother Africa … we always find to make a way,” he said, lifting his trophy.

He said he was honored to carry on the Justice Department’s legacy that included ensuring “the most sacred of American rights, the right to vote.” Holder, who is leaving the job after six years, called on the nation to “reject the forces of hate and division.”

The 46th NAACP Image Awards, given by the National Association for the Advancement of Colored People civil rights group, aired on TV One.
Copyright 2015 The Associated Press. All rights reserved. This material may not be published, broadcast, rewritten or redistributed.

Ferguson Makes a Reappearance at the Grammys. Here’s Why it Matters.