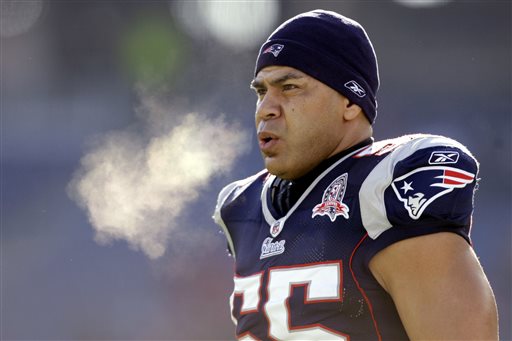 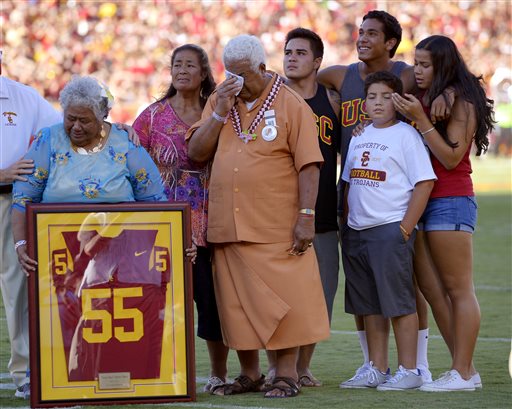 In this Sept. 1, 2012, file photo, family members of Junior Seau including his mother Luisa Seau, far left, and his father Tiaina Seau, third from left, stand during a ceremony to honor the former Southern California player during the first half of an NCAA college football game between Hawaii and Southern California in Los Angeles. (AP Photo/Mark J. Terrill, File)

CANTON, Ohio (AP) — The family of the late Junior Seau will not disrupt the Hall of Fame ceremonies on Aug. 8 despite its disagreement with a policy preventing live remarks during a posthumous induction.

Steve Strauss, legal counsel to the Seaus and partner at Cooley LLP, said in an email Monday night that the family “does not want this issue to become a distraction to Junior’s accomplishments and legacy or those of the other inductees.”

Seau, who took his own life in 2012, will be saluted with a video presentation in which his daughter, Sydney, will speak. But Hall policy does not allow for live speeches during a posthumous induction.

Sydney Seau admitted last week she was upset with not being allowed to give a speech.

“The Seau family appreciates the overwhelming support for Sydney Seau to be able to accept Junior’s induction into the Hall of Fame live and in her own words,” Strauss said. “Unfortunately, the Hall of Fame is unwilling to reverse its decision despite communicating to the family earlier this year that Sydney would be able to speak at the ceremony. Contrary to the most recent statement by the Hall of Fame, the family does not support the current policy that prevents family members from delivering live remarks on behalf of deceased inductees.

Hall representatives did not immediately respond to a request for comment.

In a statement from Hall executive vice president Joe Horrigan last Friday, a 2010 policy was referenced.

“The policy of the Pro Football Hall of Fame since 2010 regarding individuals enshrined posthumously provides for an expanded presenting video (longer than the videos of living inductees) followed by the traditional unveiling of the bronzed bust and no additional comments made from the podium,” Horrigan said.