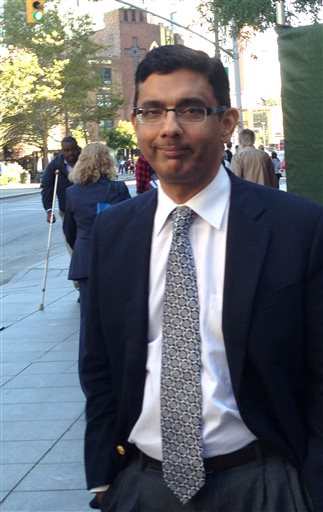 Dinesh D’Souza was spared from prison even though U.S. District Judge Richard M. Berman said the defendant continues to deflect responsibility and minimize his crime. Berman repeatedly criticized D’Souza, a one-time policy analyst under President Ronald Reagan who wrote a bestselling book and earns hundreds of thousands of dollars annually in speaking engagements.

“I think I have figured out a little bit more about Mr. D’Souza,” Berman said. “He’s a talker. In fact, he’s almost a compulsive talker. I don’t think he’s a listener.”

The judge also fined the 53-year-old San Diego resident $30,000 and ordered him to teach English to non-English speaking people eight hours a week during probation. The court-ordered counseling is to last for five years.

Federal sentencing guidelines called for D’Souza to serve a year in prison after he pleaded guilty in May, admitting he arranged for straw donors to contribute $20,000 to New York Republican Wendy Long’s failed U.S. Senate bid.

Berman said he thought a probationary sentence was appropriate but added: “I do think that it’s important to put some teeth into the probationary period.”

D’Souza told the judge he was embarrassed. The prolific author who made the 2012 documentary “2016: Obama’s America” said he was motivated by his longtime friendship with Long.

The India-born naturalized U.S. citizen said he knew her from Dartmouth University, where she and other close friends helped him escape an identity crisis after he came to America at age 17.

“I told Wendy: ‘Don’t do it. You have delicate wings and they’re going to be clipped.'”

He said he felt bad he couldn’t make appearances and do other things on her behalf as it became apparent her “campaign’s a joke.”

“I got the stupid idea,” he said of his plan to funnel money to an unwitting Long. “I wish I didn’t do something so bad and so stupid. … I chose to help her in the worst possible way.”

He said he had suffered financially and from public embarrassment.

The charges came soon after he resigned his $600,000 job as head of an evangelical college in Manhattan after a published report claimed he attended a conference with his fiancee while he was still married.

During the hearing, Berman showed a video of a television appearance in which D’Souza claimed he was selectively prosecuted and decided not to go to trial after Berman made rulings narrowing his legal options.

“That’s nonsense. Spin is what that is,” Berman said.

The judge said D’Souza’s claims he was singled out for prosecution and attempts to blame Obama were more proof he “continues to deflect and minimize the significance of the crimes and his behavior.”

“I’m not sure Mr. D’Souza gets it and it’s hard for me to discern any personal acceptance of responsibility in this case,” Berman said.