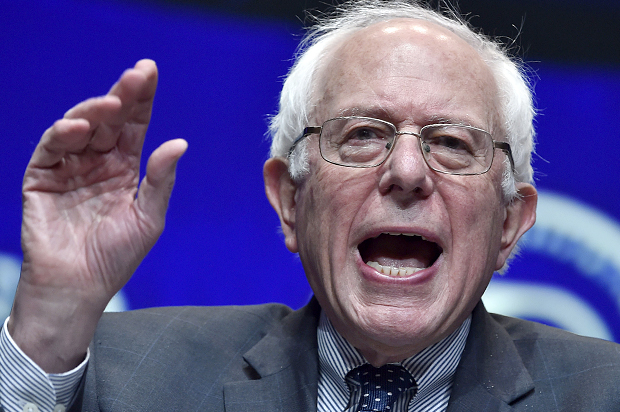 “There is no president that will fight harder to end institutional racism,” said Sanders, who was answered with a deafening roar and chants of “Bernie” from a packed Los Angeles Sports Arena, whose usual capacity is about 16,000 people.

The rally began taking on the issue head-on as Symone Sanders — Bernie Sanders’ new national press secretary who is not related to the candidate — opened the program and talked at length about racial injustice.

Symone Sanders is a black criminal justice advocate and a strong supporter of Black Lives Matter movement, and said Sanders was the candidate to fight for its values.

“It is very important that we say the words ‘black lives matter,’ Symone Sanders said. “But it’s also important to have people in political office who are going to turn those words into action. No candidate for president is going to fight harder for criminal justice reform and racial justice issues than Senator Bernie Sanders.”

On Saturday, protesters from Black Lives Matter took over a microphone at a Sanders event in Seattle and forced him to abandon an afternoon speech.

On Monday night Comedian Sarah Silverman gave the night a Hollywood touch for Sanders, who had begun the day in front of a much smaller but still significant group of a few hundred nurses in Northern California whose national union gave Sanders its endorsement.

The nurses in Oakland warmly welcomed Sanders, along with his message of taxing the wealthy, better health care for all, and free college tuition for students.

In a short speech, Sanders railed against the one percent who he says are gobbling up property at the expense of everyone else. He said it’s crazy that people go to jail for drugs while Wall Street speculators have faced zero punishment. And he said that the U.S. health care system is a global embarrassment.

“This land does belong to you and me, it belongs to all of us and not a handful,” Sanders said to members of National Nurses United who were at the site and also listening by phone and web.

National Nurses United, the largest organization of nurses with 185,000 members, formally endorsed him at the event.

Former U.S. Secretary of State Hillary Clinton is considered the front-runner for the Democratic nomination in 2016. But Sanders, a self-described democratic socialist, has gained a fervent following among people energized by his populist campaign and his plain talk.

Sanders in his California appearances mostly avoided criticizing Clinton directly as he has in most campaign events.

Sanders and other Democrats have had recent struggles with activists from the Black Lives Matter movement, who want much more from presidential contenders on racism and race relations.

At a town hall for Democratic presidential candidates in Phoenix last month, protesters took over the stage and disrupted an interview with Sanders and former Maryland Gov. Martin O’Malley.

A nurse in Oakland on Monday asked Sanders by phone how he would address racism within the criminal justice system. His answer was prompt.

“When we talk about creating a new America, at the top of our list is the end of racism in all its ugly forms,” he said. “All of us were nauseated, when we have seen the videos … we know that if those folks were white they would not be dragged out of cars and thrown into jails.”

Sanders’ response received generous applause in Oakland. A woman in the crowd yelled, “Senator, do black lives matter to you?”

The headlines and body of this story have been corrected to show that representatives from Black Lives Matter did not open Sanders’ rally in Los Angeles; it was a member of Sanders’ campaign who spoke in support of the group.