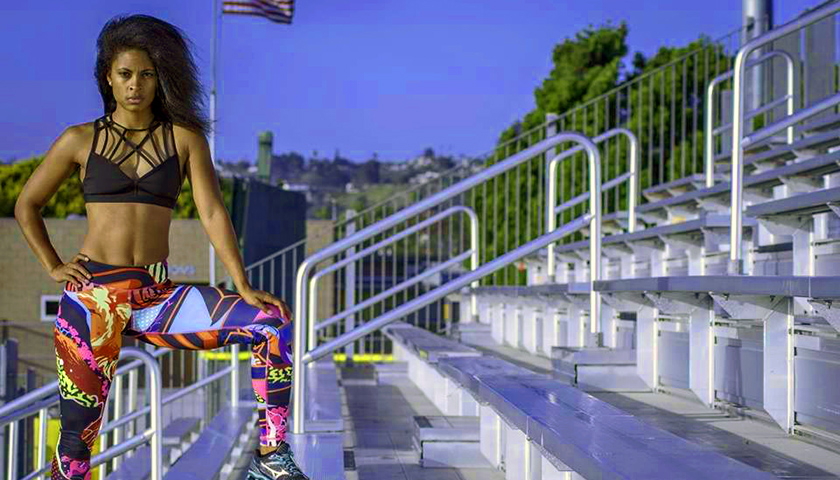 Rashan Guillory remembers the hunger pangs the most. Several months pregnant with her daughter Journey and kicked out of her parents’ house, Guillory’s new address was anywhere she could park her car. Doing her best to stay warm in the chill of San Diego nights, Guillory often had to choose between saving her money for a hotel and satisfying her cravings for food. These are only a few of the low moments for an athlete who used to soar over hurdles on the track at record speeds.

Guillory began running track at the age of 10 and quickly realized that she had talent that was beyond her peers. She traveled the country running for the Junior Olympics and went on to set records in the 100-meter hurdles at Lincoln and Kearney High Schools that still stand today.

“When you’re at your peak shape you feel like you can fly,” said Guillory. “You don’t get tired and everything is passing you by. You feel like a super human. It’s a cool feeling, because not everyone can do what you do.”

The young track star was in peak condition and setting her goals toward a run at the Olympics when the first major hurdles away from the track appeared in her path. She became pregnant, her abusive father kicked her out of the house, and she stepped away from track for a year. Accompanied by the father of her child, Guillory recalls taking baths in parks and worrying for the safety of her unborn daughter living on the street.

“It was scary and embarrassing. Life was happening to me, I was mad at God, but I had to rely on faith,” said Guillory. “I just asked the Lord to guide me in the right direction.”

Over time, the two secured jobs and were able to save up enough money to secure an apartment. Friends donated furniture to the young couple and their daughter Journey was delivered safely. The hurdles kept coming, however, as her marriage to the father of her child ended, sending her back into the abusive environment of her father’s home.

“His abuse came from anger. It wasn’t a safe place. I forgive him, but he’s not worthy enough to have a relationship with me,” said Guillory.

Now a single mother, Guillory was back to living in her car to avoid her father’s abuse and would stay with friends while she had her daughter. Seeing the cycle repeat itself, she made the decision to take control of her life and pursue her athletic dreams fueled by the most important part of her life: her daughter Journey.

“My baby kept me going. I wanted her to be proud of me,” said Guillory. “There’s so much joy in what I’ve been through because it made me stronger.”

Guillory rejoined her long time track coach Bradrick Cooper and their team to get back in shape for competition again. However, it would take time to get anywhere close to the shape she was in before her pregnancy.

“I was going through postpartum depression. I used to come to practice and cry when I was running, because I felt like the fat girl on the track when I used to be the fastest girl on the team,” the young mother said.

To accelerate her training, Guillory began working out other athletes for extra money and discovered a new passion. She started her personal training business she called “Hurdles and Hair,” inspired by comments spectators would make on her big hair when she ran track as a child.

“I would consider myself a faith-based trainer. I like to bring the aspect of spirituality and having a centered mind while you’re improving yourself and your body,” she said. “Your mind has to be right for your body to work.”

She currently trains athletes, community members, and corporate groups between San Diego and Los Angeles, catching the attention of some high profile clientele.

She was recently invited to mansion party as an athlete and met a mentee of Don-A-Matrix, the personal trainer for Kanye West. Guillory received an invitation to meet the famous trainer at a concert and got to do a workout with him. Matrix was impressed and has provided an inside track toward securing celebrity clientele like Mr. West himself and the Kardashians.

“My life changed right then and there,” said Guillory. “Now all of this cool stuff is happening.”

Guillory has also gained a lot of attention from her daily Facebook Live morning routines. Each day she hits the mat to lead her audience through Olympic warm-ups and training routines. She’s often accompanied by her daughter Journey. A beautiful testament to everything she’s been through to get to where she is today.

In the future, Guillory plans to try out for the 2020 Olympic track team for hurdles and continue to grow her personal training business.

“I want to bring the word of God to fitness. I want to give people hope and another aspect of the Christian experience,” said Guillory. “You can be beautiful, sexy, fun, edgy and a Christian woman at the same time.”

To schedule a workout with Rashan, visit http://www.hurdlesandhair.com.

The San Diego Voice & Viewpoint is a member publication of the National Newspaper Publishers Association. Learn more about becoming a member at http://www.nnpa.org.

Why Are Black People Still in the Dark When It Comes to HIV Prevention?