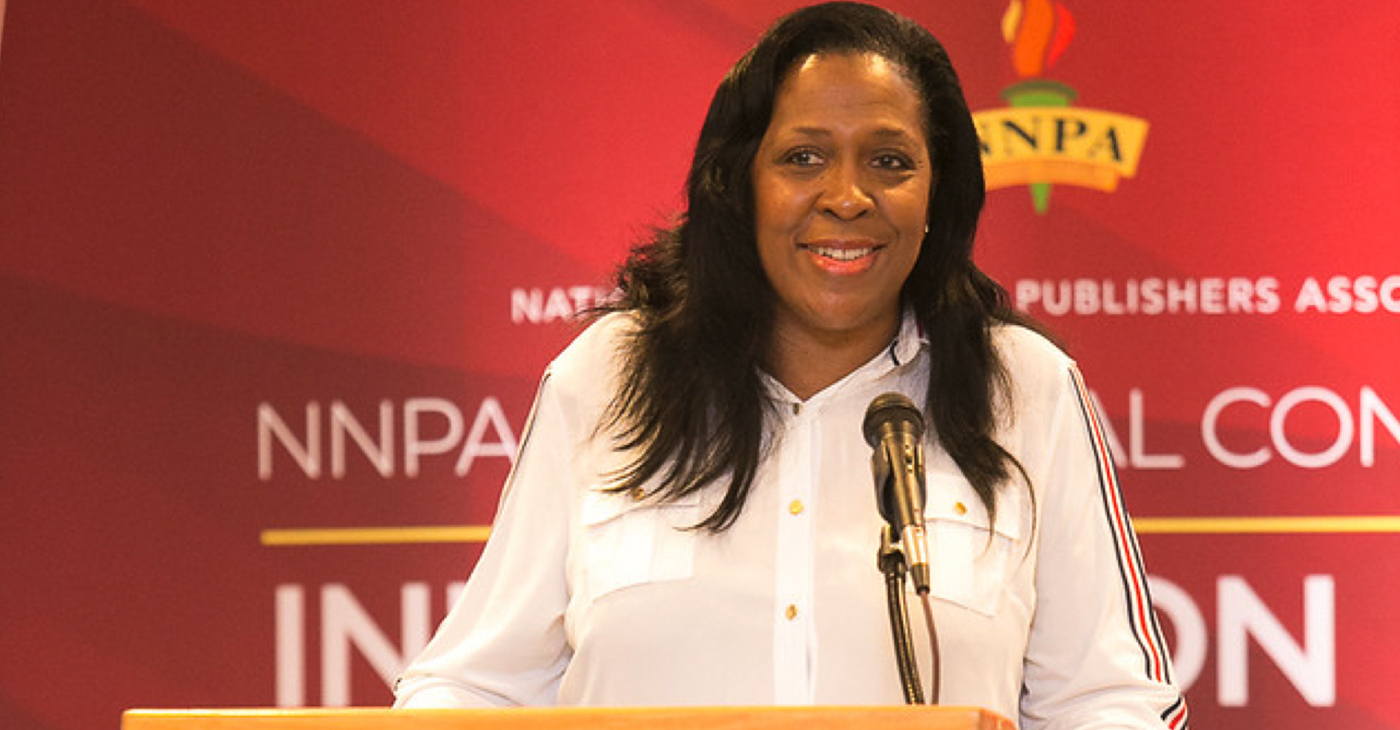 That was the chant being sang by many people, as they attended the recent Annual Meeting of the National Newspaper Publishers Association (NNPA), in support of the newly-elected chair of the NNPA, Ms. Karen Carter Richards, publisher of the Houston Forward Times.

Carter Richards was overwhelmingly elected as the new chair of the NNPA in a landslide victory, garnering 78 percent of the vote from her peers.

Running on a theme of “Same Spirit. Same Mission. New Vision.”, Carter Richards emphasized throughout her campaign the importance of the NNPA being fully recognized and identified as the “Original Black Press” of America. Her focus was to build on the foundational and historical standards that have helped the NNPA and its members make a significant impact in this country since its inception, while also strengthening every NNPA member publication to make even more of an impact during the challenging social and political climate in this country.

“I’m a second-generation publisher and my family has been a part of the NNPA for over 50 years,” said Carter Richards during her acceptance speech at the NNPA Annual Convention that was held in Cincinnati, Ohio this past week. “It’s time for a NEW VISION and leadership that goes beyond where we used to be.  We are the Black Press of America, the National Newspaper Publishers Association, so when I ask are you down with O.B.P., I am talking about letting people know that we are the ORIGINAL BLACK PRESS, and we aren’t going anywhere!”

The NNPA, a trade organization which represents over 200 Black-owned media companies across the United States, is celebrating 79 years of existence this year, while the Black Press of America is celebrating 192 years since Freedom’s Journal was published as the first Black newspaper in this country in 1827.

Karen is a native Houstonian and is the CEO and Publisher of Houston Forward Times, the South’s largest independently-owned and published newspaper. Her parents always stressed the importance of the Black Press to her, and the value of sustaining its consistent voice.

At the age of seven, Karen’s father, Houston Forward Times founder Julius Carter, put a basket on her bicycle and had her delivering the newspaper in her neighborhood.

As part of her father’s foresight, Karen was exposed to a world of politics, culture and business, which had a lasting impact on her emotional growth and professional development, allowing her to develop a strong work ethic and a sense of timeliness at an early age.

Karen was often told by her mother, and eventual Houston Forward Times publisher Lenora “Doll” Carter, that her father would often say to her that if he died on a Monday, be sure to bury him on that Tuesday and get the paper out.

For Karen, those prophetic words from her father came true, and impacted her family and business on two separate occasions. In 1971, the Houston Forward Times reported a story that subsequently led to their building being bombed. From all of the pressure, Julius Carter died of a massive heart attack four days later. In honoring her husband’s wishes, “Doll” Carter did not miss the next issue and immediately took over the reins of the Houston Forward Times in 1971.

Karen states that her mother was like a drill sergeant, making her arrive early and stay late. She had to learn everything from the front door to the back door, and at the time, she did not realize that “Doll” Carter was preparing her and grooming her for one of the most devastating events in her life.  As a result of a massive heart attack on April 10, 2010, “Doll” Carter unexpectedly passed away and just like her mother, Karen had to take over the daily operations of the Houston Forward Times without a traditional transition of power.

Upon taking the mantle, Karen immediately turned the Houston Forward Times into a multi-media powerhouse that continues to remain one of the strongest and most trusted voices for African Americans in the Greater Houston area.

Karen believes the challenges and the adversity she faced as a newly minted publisher, coupled with the things she has learned from being around her fellow NNPA Publishers, have prepared her for her new role as the newly elected chair of the NNPA.

“I’m a Publisher,” said Carter Richards.  “After my mother unexpectedly passed away in 2010 and our Editor of 40 years passed away two (2) months after her, I was faced with the responsibility of taking a challenging situation and making it work. I knew it would be hard, but I was up for the challenge. Ten (10) years later, the Forward Times still stands strong and I stand even stronger because of what my parents taught me and because of what I learned from the NNPA publishers. The publishers are my first priority. We must educate, equip and empower all of our NNPA Publishers so they can make an even greater impact in their respective markets.”

Karen will be working with an all-women Executive Board to begin her tenure as NNPA Chair, with Janis Ware (The Atlanta Voice) being elected as First Vice-Chair, Fran Farrer (The County News) as Second Vice-Chair, Brenda H. Edwards (New Journal and Guide) as Treasurer and Jackie Hampton (The Mississippi Link) as Secretary.

Karen expressed her excitement about the future of the NNPA, stating her eagerness to work with her fellow colleagues to move the organization forward, and make sure the organization is in a better position to strengthen all of its member publishers and their respective newspapers.

Some of her top priorities as chair of the NNPA include:

Carter Richards states that there are many more initiatives that she hopes to work with her colleagues to implement, but really wants to focus on doing some immediate things that will help all NNPA member publishers – short and long term.

Jeffrey Boney is a political analyst and frequent contributor for the NNPA Newswire and BlackPressUSA.com and the associate editor for the Houston Forward Times newspaper. Jeffrey is an award-winning journalist, dynamic, international speaker, experienced entrepreneur and business development strategist. Follow Jeffrey on Twitter @realtalkjunkies.

“Countdown to Demolition,” Baltimore City Moves to Save Calloway Home