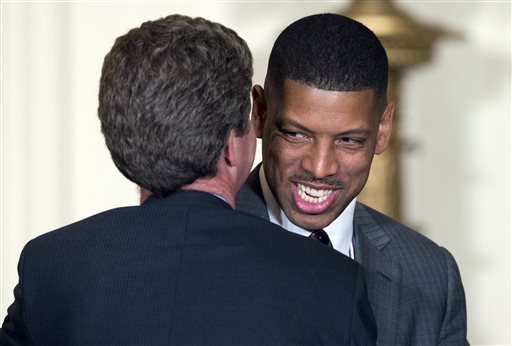 In this Jan. 23, 2014 file photo, Housing and Urban Development Secretary Shaun Donovan, left, talks with Sacramento Mayor Kevin Johnson, before President Barack Obama arrives to speak at a reception for the U.S. Conference of Mayors in the East Room of the White House in Washington. (Carolyn Kaster/AP)

(Sacramento Bee) – Sacramento Mayor Kevin Johnson’s takeover of an embattled black mayors group in 2013 succeeded largely on the backs of city staff and volunteers who lobbied mayors around the country, organized board meetings and acted as intermediaries between the White House and federal agencies, according to thousands of emails and documents released Tuesday by the city.

More than 6,100 pages of emails and 16 documents obtained by The Sacramento Bee through the Public Records Act outline years of involvement by Johnson’s staff of paid employees and volunteers to cement Johnson’s leadership of the National Conference of Black Mayors and gain clout in Washington, D.C., in one of the most vivid examples of the mayor’s ambitions.

NCBM, a historic group born of the civil rights movement, had lost much of its credibility and clout due to years of financial mismanagement, as detailed by court documents and a federal criminal investigation of the group’s former president.

David Pittinsky, a private attorney working with Johnson on NCBM litigation and the mayor’s request to block the city’s release of some emails, said Tuesday on Capital Public Radio that “whatever Mayor Johnson did as president of the NCBM was not Sacramento mayor business.”