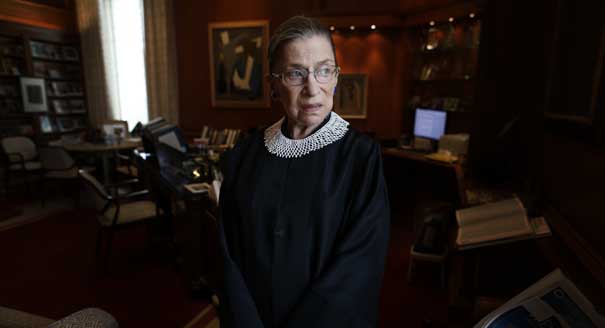 Associate Justice Ruth Bader Ginsburg poses for a photo in her chambers at the Supreme Court in Washington, Wednesday, July 24, 2013, before an interview with the Associated Press. (AP Photo/Charles Dharapak)

(Politico) – Supreme Court Justice Ruth Bader Ginsburg is pushing back against suggestions that she should soon retire, saying President Barack Obama would be unable to get a justice like her through the Senate.

“Who do you think President Obama could appoint at this very day, given the boundaries that we have?” the 81-year-old justice told Elle Magazine in an interview excerpt released Tuesday. The wide-ranging interview portrays Ginsburg — seen as a member of the court’s liberal wing — as attuned to the dynamics in Congress and some of the greater political and social discussions in the U.S.

In the interview, she suggested that Senate Republicans would likely block any potential nominee like her.

“If I resign any time this year, he could not successfully appoint anyone I would like to see in the court,” the oldest member of the high court said. “[A]nybody who thinks that if I step down, Obama could appoint someone like me, they’re misguided,” later adding that she can “do the job full steam.”