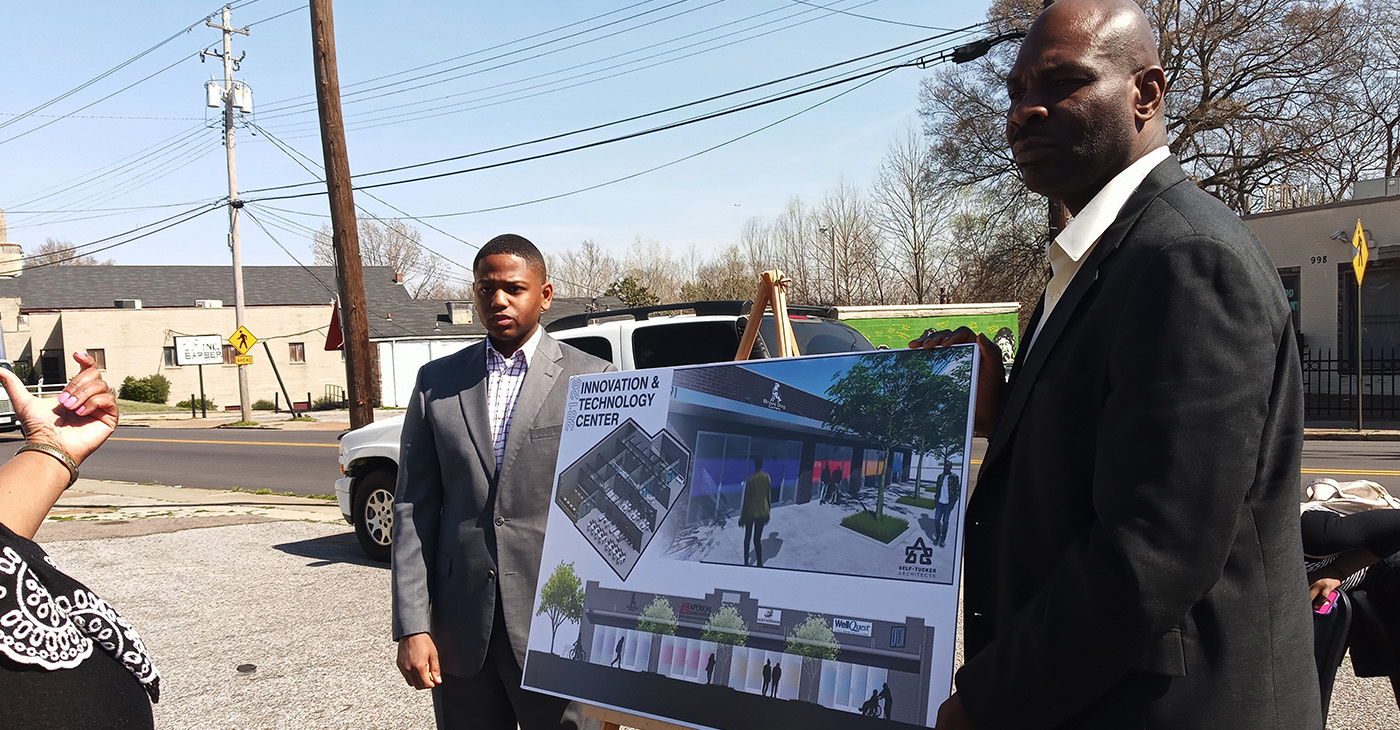 And it’s coming to Memphis, specifically Soulsville USA, located in ZIP code 38126 and known as one of the nation’s poorest areas. A symbolic groundbreaking spectacle this past Saturday (announced that the LeMoyne-Owen College Community Development Corporation (LOC CDC) would build a franchised BraveDog Video Gaming Innovation Center (BDIC).

Residents, community supporters and elected officials converged on the site and cheered the highly anticipated project that will be housed across the street from the historic Four Way Grill at the corner of Mississippi Blvd. and Walker Ave.

“Although this is the poorest ZIP code in the state, it has endured because of the energy, the fight and goodwill of its people,” said Jeffrey Higgs, the project manager and executive director.

“They ran Ida B. Wells off this same corner. Isaac Hayes and Maurice White and Al Green used to hang out over at the Stax Recording Studio. Dr. Martin Luther King Jr. ate at the Four Way Grill and our beloved college, LeMoyne-Owen College, (is) a 156-year-old institution. There is a lot of history here,” Higgs said.

“We as a company are ecstatic about this partnership, and we applaud executive director Higgs and LOC CDC for the amazing work they do in the community,” said Mack. “We envision LOC CDC and Greater Memphis becoming a catalyst for innovation within the video games and eSports industries. As a company, we are all fully committed to this initiative.”

The BDIC will be housed in nearly 2,000 square feet and is projected to have an estimated $15 million economic impact in South Memphis and the downtown areas.

“This is fantasy turning into reality,” said Mack. “We appreciate those individuals and corporate citizens who have already reached out to support this project financially. We invite others to join as well. Help us to save our young people.”

“I was a South Carolina kid who only had a single parent,” said Reese. “What food we did have, Mother would divide it between my sister and I while she would drink water. People ask, ‘Why do you grind so hard?’ I just tell them that I work so hard because I can still hear my mother’s stomach growling through the night.

“LeMoyne-Owen and this community means something special to us. LOC gave me my first job as an adjunct professor. I will never forget it.”

Reese cited youngsters as the reason why the games lounge is so significant.

LOC CDC president Michael Minor praised the “spirit of cooperation and pure joy” from young people at the school who were on hand to cheer the plans for a gaming lounge.
“This facility will bring others into the community who don’t look like us,” said Minor.

There are just no losers here. The excitement of our young people means so much. This will be our own community place where we can gather and just fellowship with one another.

“One of BraveDog’s most important next steps is to bring together storytellers from racially diverse backgrounds to develop high quality video games that accurately and authentically reflect this community.”

Mack admitted that the concept of earning six figures seems unrealistic for children and teens who live on SNAP benefits and welfare.

“One of the most important ways to change the mindset of those who live in poverty is to help them see a way out of poverty and give them the tools necessary to build a better economic future,” Mack said.

“We will help facilitate these possibilities by working to get community residents on the payroll of large tech corporations as well as assist local entrepreneurs become prosperous business owners.”

Rooted in 38126: Owner of Poor Man’s store rich with friends and neighbors